You know, news, like a bullet, ricochets
and reaches me with a lag when it’s spent;
I believe it’s really not that different
for you. For those who stay still at one place.
Some edge, angle’s lost due to the delays
though if I so choose, it can be real time -
know them at their freshest – blast, rape, war crime;
the leaf skeletons of petty prejudice
showcased, as though nothing was amiss.
But I avoid the WiFis in cafés.
Better by far, my love, out in the desert
where the dust is timeless, and the moon phase
the sole cycle eternal, nothing to raise
except small pegs and tents, no red alert.


This concludes the series of experimental love sonnets I've been writing/posting this month to celebrate everyday loving as opposed to drama queen loving. Love is a tidal wave in the sea, sure, but it is also the ordinary water from the faucet.  I see the sea once or twice a week, dip my toes in sometimes, infrequently, but those faucets I use everyday. Couldn't do without them in fact. The sea is good to have, but I've lived inland too, without it.

I'm travelling this week, back in Kolkata again, so will catch up with you when I get back. Meanwhile, stay well. 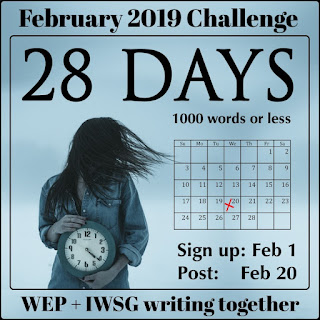 The prompt for this Challenge has been picked as winner from among a host of  IWSG member generated ideas. The winning prompt is from long time WEP/IWSG member Toi Thomas. Nifty!

I'm coming in with something I've never tried at WEP before - a photo essay. Last summer I took a trip to UK, and finally learnt to use my camera phone. I have used a 28-day period  for my entry - based on the holiday and the pre-holiday prep and excitement mode, from 7th July to 3rd August 2018.  I hope you'll enjoy it.

You know, I left my raincoat on the hook
because I wouldn’t need it on the road –
three hundred suns per year, promises made good,
and at a pinch the sheet wrapped like a cloak.
Does it hang there still? Do you sometimes look
in passing in its pockets for a note?
a memory? - perhaps remnants of some mute,
faded smells of rain and cigarette smoke.

It drizzled here today but it was brief.
I went walking without a waterproof –
the rain was like your fingers on my face.
But all rain feels the same in every place,
wherever I go, however far I move –
some strange fluttering bliss akin to grief.

Well, V-Day has come and gone, and as in most other years, I'm continuing with my own version of love poems to mark the month. Because love is kind of an everyday thing around here, in addition to being a many splendoured thing of course.  Love is the dressing in life's salad bowl, it holds the salad together, makes the greens glisten and adds the zing, but you don't really talk about it much. It's made everyday without a fixed recipe, which was really a list of ingredients scribbled down somewhere on the stub of a ticket or something. Gone missing for years now, but it doesn't matter because it's a conditioned reflex anyways, if you know what I mean.

On a more sombre note, the news out of India was terrible on the 14th, 44 jawans killed in the most atrocious and audacious suicide bomb attack in Kashmir. Or maybe not so audacious, given that we never seem to learn anything from our mistakes. Not one single thing! Terrorists can storm our parliament, besiege an entire Indian city, massacre security personnel at our border posts at will, kill dozens of them on the most heavily guarded road. Just like that. It turns my brain inside out to even think of it.

Respect and thoughts for the soldiers and their families.

You know, I stop sometimes at an unknown town
and every market place and every street,
the parking lots, the concrete ramps sloping down,
the face of every stranger I chance to meet,

the sudden lunge of a voice by a window,
the rising noise of an approaching bus,
its windshield gleaming, mirror worked leaf shadows –
they are all you, all of it's about us.

The lampposts blink in the dark – power’s out,
the stars too blink and gulp in unison,
a blind busker tap-taps to the roundabout.

And even though I’m far from the river mouth,
I’m still with you, and still with our horizons,
however far east or west, north or south.


As in most other years, I'm doing my own version of love poems to mark the month, though I'm not a big believer in V-day.  But I'm perfectly fine with anyone celebrating V-day, love and let love is the general policy around here. And who wants to argue about getting more chocolate, right? It's all good, whichever way it's celebrated. Love can run deep in an aquifer, or it can be a gushing hot spring, or a steady-serene, glassy surfaced lake. If you want to splash out, splash out, and if you want to be free, be free.

To paraphrase another great - there are a thousand ways to kneel and kiss the beloved. Just keep the knees flexible.


You know, it is my job to love the road
as much as loving you. As what’s called home,
wherever that may be – without postcodes
or doorsills, bricks and mortar, steel and chrome,
walls that can hem things in. This elbow room
for neuroses, identity’s fuzzy cloud,
no pillow-talk, sheets of dusty perfume,
solitude, waxing and waning in the crowd.

Years of tarmac taken up to realise,
to give up the yearnings for residual,
to straddle two halves of the same whole.
Home’s the fringe of your lashes, pensive eyes,
patient lids. Home's also this burning fuel.
The slope, the bank, the turn, and the rare pothole.

As in most other years, I'm doing my own version of love poems to mark the month, though I'm not a big believer in V-day. Because love is the biggest deal of all but it is all in the day's work, month in and month out. It is the only work with any kind of job satisfaction guaranteed imo. You don't have to count the miles, you don't have to count the eggs, never mind the chickens, before or after they hatch. Everything, every little thing, counts, and nothing has to be counted. How super awesome is that?

You know, I can’t say exactly where I am
but here the skies at night are bright with stars,
the earth is deep and cold against my scars
and though I’ve lost the map, I’m far from home –
the tents glow in the dark like low burning flames
flickering small in alabaster lamps.
You can call it a milestone, this lonely camp
or just another pit stop on the way,
a different northern route to get back someday
and I’ll go back to you, from where I came.
Everything will have utterly changed meanwhile
and yet everything will still be the same –
faded handprints on our walls and doorframes.
My feet on the flagstones. The thrill of your smile.

Well, I'm so glad January is over, it's been rough. Not just for me personally, but also for a lot of people I know, online and off. Relieved to get through without any major damage.

As in most other years, I'll be doing my own version of love poems to mark the month, though I'm not a big believer in V-day. Love is kind of an everyday thing around here, if you know what I mean. Like a low grade fever. You're not in bed flailing around focussed on being delirious and blind, being plied assiduously with chicken soup and ginger tea. Nope. Just that your eyes are glittery and/or swimmy, your pulse is a tad faster, your entire perspective a bit heightened. But you're going about filing documents and filling up the fuel tanks just as usual.

It's a nonstop party inside even when the mask looks stern and the hands are smeared with some nameless gunk.  Because the heart is nearly always festooned with tinsel and with those fairy lights which won't stop twinkling. It too, is like a candle behind impassive, translucent stone, for the want of a better analogy.  The glow of love and gratitude and amazement doesn't always show up from outside, but I assure you, it's always there.