If you have a garden and a library, you have everything you need. ~ Cicero.

The older I’ve got, the more reluctant I’ve become to use the word ‘have,’ as in possession, whether of animate beings or inanimate things. My life so far seems a nonstop exercise to stop me from getting comfortable with that word. The universe is constantly drumming it into my head that well, nothing can be had for too long, certainly not the entire duration that I might want it for. Not people, not gardens, nor books. I wonder if this has anything to do with gender, or having the philosophy of the Gita dinned into one through untold generations? Or maybe both? Are men more likely to identify with absolute ownership, authority, permanence? Is this some sort patriarchy situation playing out in my head here? I don’t know. But barring this reluctance about possession, excepting this one tiny caveat, I have no disagreement with Cicero. A garden and a library are totally enough, or would be if I ‘had’ them.


Sorry, are you here looking for the weekly poetry? It’s not that’s not being written, it is, but since it is starting August, I thought I’d do a sort of demiupdate. August is an important month, private family milestones as well as the national Independence Day, India completes 75 years as a sovereign nation on the 15th - huge dos being planned back home, huge controversies as well, I'm not going there. What I'm saying is - I just completed 100 days of living in Fiji. That totally demands an update. Therefore, no poetry. It will be back next week as usual.

So. What's been going on the last 100 days? The garden delights me, it totally doesn't care that I'm only a tenant and here for a limited time. And it continues to put forth its blooms as and when due. I have managed to i.d. most of the flowers and plants. The open living space delights me - not so much. It is a tad inconvenient to have no privacy - hubby's colleagues need to call around sometimes on work and I do not always feel sociable and/or presentable, I don't know whether they like having their colleague's wife's mad hair and grumpy mood inflicted on them, probably not but there's little that can be done about it by either party. Hubs had the Covid a few weeks back, fortunately mild and continued to wfh so he'd be on zoom calls in the living area while I'd be trying to get a meal together, and well, Indian cooking is all pressure cookers whistling and spices being sizzled in lightly smoking oil and so on. Or I'd be trying to write and he'd be watching the TV/Netflix and there's no way to cut off the noise...so, nope, totally not a candidate for open plan lifestyles.

Checked out the local bookshops in Denarau, Lautoka and Suva. Let's just say their offerings are mostly not to my taste. In other words, total write off. However, not to panic, I have become a member of the public library in Lautoka, duly providing my grandmother's maiden name and proof of my local address etc etc and managed to read some 8-9 books, but then it's shut down without any notice for renovations and is unlikely to open before two months. But I'm still okay for reading materials, because the landlord has left a small shelf of books here some of which I will tackle till the library becomes functional again. And there's always Project Gutenberg if all else fails.

The other thing that's been done is to walk every beach/waterfront from Lautoka to Denarau - Saweni, Viseisei, Vuda, Lomolomo and Wailoaloa, spread over a distance of 30 km from Lautoka to the end of Nadi Bay. Also the Victoria Parade and Nasese seawall in Suva. The Garden of the Sleeping Giant we visited from the hotel in Nadi, I wrote about that in April during the A-Z itself.

The next target is to go onto the Coral Coast towards Sigatoka to the east and also go inland to explore the Nausori Highlands, I am given to understand it is super scenic. Though truth be told, it is scenic in every direction. I take my petty peeves and stresses to the waters nearly every week and they calm me down without fail. Oceanwatch and skywatch and mountainwatch, ever changing, ever the same timeless, never a dull moment and yet total serenity.

The offspring is planning to be here, sandwiching a short break between his summer and fall semesters, that's majorly buoying up ye olde spirits. So much has happened since we saw him last that it feels far longer than a year. My nagging and micro-managing skills need some major brushing up! :) Oh, he's been instructed to get books for me too.  Once he arrives, I fully expect there will be further additions to the to-see and to-do targets. Maybe we can go off to one of the other islands...Mamanuca or Yasawa...

Writing-wise, there's the Write...Edit...Publish... Challenge coming up mid-August, we're writing to Moonlight Sonata - excited about that.  This year's challenges have been based on music, this one's the only classical piece, I'm really keen to see what directions people take with this. I'm planning to do something unusual with it, do something off beat, let's see how that works out. 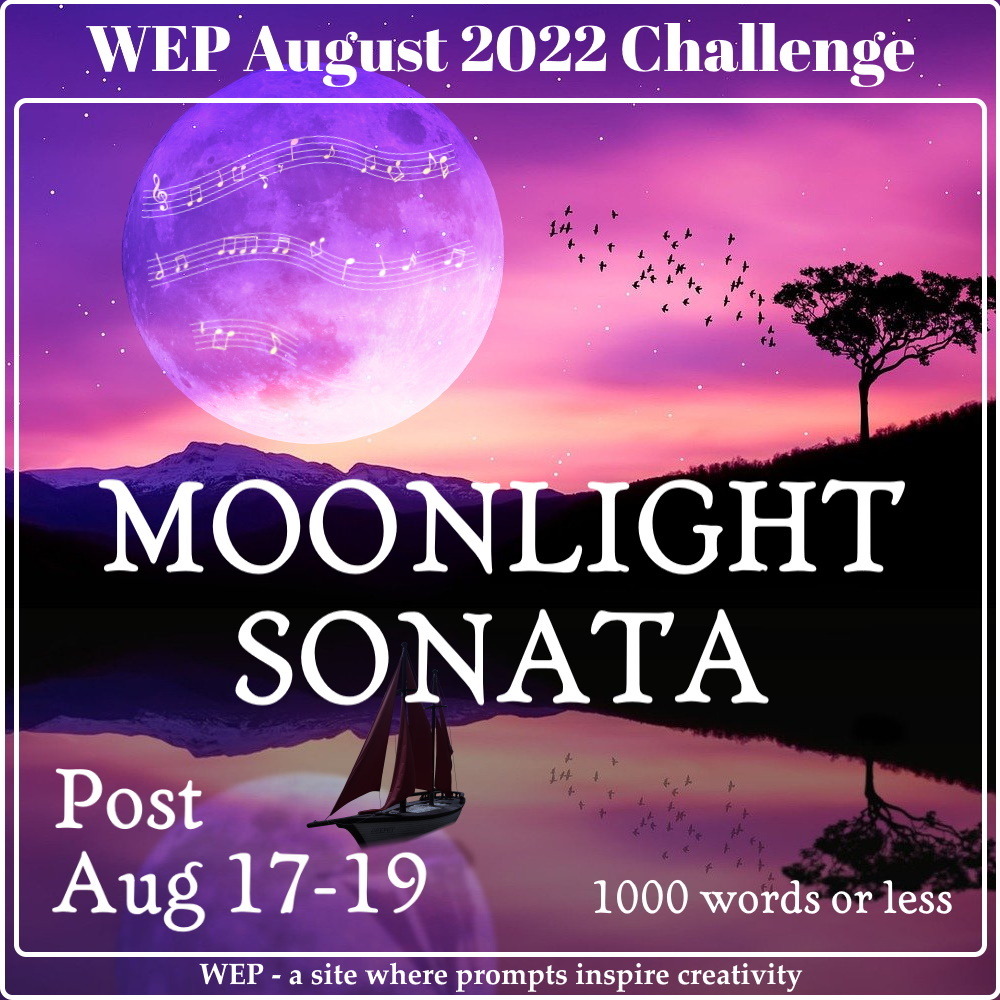 Also, I'll be writing and submitting more to The Daily Life Magazine from now on. A totally new form, neither poetry nor fiction, not even travel memoirs but general essays. Excited about that too, though also a little apprehensive.

All in all, 100 days into Fiji, 7 months into the year - I have access to a garden, access to reading material and access to writing. I'm sorted. Bonus, new places to go, new things to try. I'm super sorted. No grounds for any complaint.

Stay well and happy. What are you looking forward to this month? Hoping they'll come to you just as you want and wishing you a wonderful August!

Did you know that shop down the corner here?

I went looking for it, but it was closed…

Son, it shut when the lockdown was imposed

and never opened again. How many years

have you been away? The last two have changed

so many things – how we work, play, buy and eat,

the number of shops shut down on this street

the entire neighbourhood’s been rearranged

livelihoods destroyed, a war without a war

shutting down our lives, never mind the store

the last couple of years haven’t been kind

where have you been, son? Stuck on the other side

of the world, waiting for the plague to subside.

Last two and a half years, I've been treading water as far as writing goes. Posted here regularly of course, and at WEP - these are like breathing, can't imagine life w/o them (Thank you my WEP and blog families!)

But I made no submissions anywhere. Zero. I wrote plenty...I was just nowhere near up to editing the stuff into submission-worthiness. Hopefully, that out-of-control spell is now broken and I am now open, business as usual. For which I am grateful.

Check out this link here - Portrait of a Garden, and if you feel able, please share on your sm platforms. Thank you for your support.

The sun has almost touched the horizon

and I too want to stay close to the ground

to read the stories silken sands have spun,

where the ocean’s scattered seashells around

The tide is low and a tired old white kite

fluttering over the last of the daylight.

Their day’s work’s done, the boats are drawing in

My body is crumbed with glittery sand

and my hair is billowing with the tide

I’m neither of the water nor this land

and I’m neither the road nor still hillside.

Just want to stay close to the wash of blue -

never the bird, rather a worm’s eye view.

What’s a solstice? or even three -

I’ll still be reaching for the phone

till the last stronghold of memory

tumbles into ruin and is gone.

All seven seas and all time zones,

include the seven ages of man,

and the entire galactic gameplan -

it will still flash into the brain

instantly at anything new

transmit this pulse of thrill to you,

before the surge ebbs out again.

You are out of reach, everywhere. 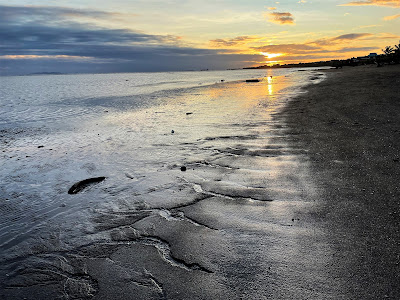 I'll go far away. Your hate and prejudice

will be like sand between my toes and won't stick,

fall off from my skin even as it dries -

not a grain nor crumb. Not an atom of it.

Not one yarn of this entire tissue of lies

will touch me, nested in a different life.

Nothing but rightful the balance of justice

not each thrust acid sharp silver keen as knives.

I will stand here steady on my own two feet

and what you've sown is what you'll have to reap

food grains grow only where the waters run sweet.

You'll sit alone with your sharp words and weapons,

cold your fireside. And the harvest in ruins.