D'you Know What I Mean?

A certain perfume of sunlit clothes, a soft hand

rested against the splayed green leaves of aubergines;

deftly weighing the merits of flours and sand;

weaving through the sections of old magazines.

a cloud shape, a landscape. And it’s instant recall.

I turn eyes off, I turn myself to face the front

and suddenly the front reels back to a time past.

Though I am strong and resolute, I do not want

to burrow back into times with her. It doesn’t last.

Even when I’m quite convinced it’s under control,

a patch of sound, a pixel, equal instant recall.

Low burning flames. And flares of nothing at all -

Anywhere on earth, in the hills or plains,

when the last one’s drawn, and no breath remains -

lay the withered grass down on any terrain

and there’s no need to disturb the gods.

Feel free not to chant prayers at the pyre -

and by the way, either would do, soil or fire -

home isn’t a point, a place to retire,

because home is, after all, a road.

And if you’re feeling brave, when I’m gone

let the birds have the flesh, the sun bleach the bones,

neither fire nor fuss, nor digging nor stone,

just a slow collapse into the clods.

Like a small footprint washed off by the sea,

a paper boat sunk after its short journey,

without markers for where they implode.

don’t sully the air with heat and huge turmoil

don’t light up the lamp, don’t pour out the oil,

lose me gently to this bay that is broad.

Keep it light and soft, keep it natural

both the print and tread quiet, and erasable,

the end a laying down, no special disposal,

let me scatter where I fall with my load.


Write...Edit...Publish... is sticking to its Lite version for now...and I am sticking to the essay format... 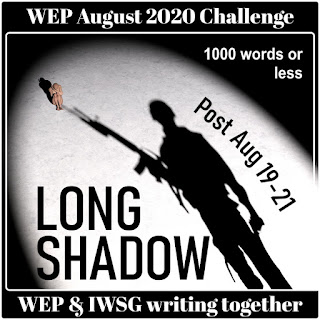 A human being is only breath and shadow. – Sophocles.

The mind is a shape shifter. Like a shadow – squat at midday, long by sunset. One minute it is a grasshopper, all chirpy multitasking cheerfulness, juggling a million thoughts per second, leaping off one to the other, unable to stick with just a single. The next it is a bulldog, just lugubrious folds and salt-of-earth tenacity, focussed sharp and a serial stickler for one at a time.  Yet again it is a pigeon, slicing through the fluff and zooming home to what matters.  As mercurial as a drop of water on a lotus leaf, huddled into its own rounded self, concise and self-contained and tiny, unable to wet anything yet reflecting a whole skyscape of clouds above it.

The mind can contain a whole skyscape of grief and loss and stressful pandemics, yet go about working cell by cell on spreadsheets, or writing word by word, an essay sparked by a prompt. It can imagine the universe is its oyster, it can blithely go about seeing multiverses in a grain of sand.  Smoothly glide back and forth along the continuum of time from history and art history to sci-fi and fantasy. Between truth and fiction, between the abstract and concrete, between the painfully personal and the monumentally universal. There is no end to its skittering about.

Today it’s vaulted back to the first seat of Western higher learning, to Athens. That’s where the history of the cast shadow in Western art goes back to - ancient Greece. They were the first to develop and use ‘a geometry of light’ and cast shadows in art. Apollodorus, an Athenian artist, introduced a shading technique called skiagraphia (lit shadow-painting) to create the impression of volume, depth and space on a flat plane. However, in the Allegory of the Cave, Plato set up a shadow-reality dichotomy that continues to influence all spheres of Western culture even today. That Greek perception of shadow was negative – associated with ignorance, illusory, unreal.

A counterpoint can be found in the Natural History  in which Pliny the Elder, the Roman historian, recorded the Greco-Roman origin myth of Western art: a young woman – the clay modeller Butades’ daughter, who captured her lover’s shadow on a wall as he slept on the night before his departure as a romantic keepsake. This was a far more positive angle, a love story, but it could not throw off the Cave’s, um…long shadow. Cast shadows in art dwindled from the classical period onward, with their dodgy impression of ugly, gloomy, negative, deluding the viewer with trickery and deception. Shadows in art remained a no-no for centuries. Till the Renaissance upended everything.

Darkness is the absence of light. Shadow is the diminution of light. – Leonardo da Vinci.

The grasshopper meanwhile, as is its wont, has leapt down a rabbit hole. What exactly were the Easterners doing to their shadows? Eastern art, the Chinese, Japanese and Indian traditions are deep and ancient, but they always were more stylised than Western art. No space for cast shadows there historically. From the Renaissance onward Western art explored the exact representation of experienced reality through linear perspective, shading and shadows.  Eastern art by and large remained moored in tradition however, and experiments with realism came later, mainly due to European colonisation. But the converse is also true, Eastern art diffused into Europe and inspired Western artists too. In particular, Japanese art crossed the oceans and left its indelible mark on one particular, much celebrated artist.

A landmark Renaissance work, where  linear perspective and cast shadows were first used, was a fresco in the Basilica of Santa Maria del Carmine in Florence. The artist, Masaccio (1401-28) was one of the pioneers in Renaissance art - he used cast shadows masterfully.

In another Masaccio artwork – St Peter Healing the Sick with His Shadow, the shadow of the saint dominates the core message, but visually the shadow does not hide the sick.

The vocabulary of shadows continued to develop through the work of later artists - Caravaggio, Bernini, Gianlorenzo and others.  By the time of Rembrandt and Vermeer, the techniques of perspective, chiaroscuro and cast shadows were quite established. And then Impressionism with its soft brush strokes, stunning colours, subtle movement and shimmery reflections  shredded all the rules again.


An evolution of light. Looking at the body of work this artist left in his short career, there seems to be a progression from the shadows into light, both literally and figuratively. In his early works, he used chiaroscuro to marvellous effect. His palette and perspective changed radically midway when he came to Paris. There he encountered two forces which would change his art. One, the Impressionists, and second, Japanese woodcuts. His palette became lighter, brighter, more colourful. His perspectives became flatter, and his art avant-garde,  by repurposing the ancient.

Japanese art was a major inspiration for Vincent, he wanted to find a take-off point for a more modern, more stylised vibe, and Japanese prints – with their bold patches of colour, prominent contour lines, lack of horizons and shadows, truncated frames and focus on nature – fitted admirably. He went south to Arles looking for the “clearness of atmosphere” and “colour effects” of Oriental prints. Even his idea of an artist’s commune was based on Japanese monks living and working together. His painting of his bedroom at Arles is the epitome of the Japanese influence – bold colours, a subtly distorted perspective and removal of all cast shadows.

Unfortunately, what happened on canvas did not translate into personal life. The more his external work exploded with colour and creativity, the greater was the turmoil in his inner workings. The artists’ commune did not materialise, Gauguin came and left after a major disagreement. Vincent had a series of mental breakdowns. His neighbours petitioned for him to be removed on account of ‘insanity.’ An abject sense of failure dogged him. Like some Gothic horror story come eerily to life, for every burst of brilliance on the easel, his life seemed to become a couple of shades darker, regress into the terrible shade of mental illness. Despite his efforts, he was wholly unable to shake that off. Till all that remained was a shadow, without breath.

Read the other entries -
Posted by Nilanjana Bose at 09:00 50 comments:

This heart is still tricoloured, as always

but it does flutter at half-mast these days.

Whatever may be raised – in stone, in brick,

in time all will be levelled. Nothing stays.

Neither your chair, nor my personal grief,

not these elaborate cons, these strange motifs,

the deluge of tinsel and marigold

the optics, the updates tightly controlled,

will ultimately fade. Our time is brief.

As uncertain as it is – who’ll outlast

whether you,  I, or the heart at half-mast -

mills have an odd habit of being cyclic

and fates are fickle, hardly ever steadfast.

Greetings on Independence Day to all those who are observing it this month. Not sure about using the word 'celebrating' with all the various on-going challenges.

At other times, the distance is a log
from here to the vanishing point, its weight
unwieldy, no language, no dialogues
to lift it, to break through, communicate.

So you leave it hanging, leave things alone,
you wipe off the scary scenes in your head.
You keep mumbling, it’s nothing, it’s the phone.
It's not him. It’s just the phone that’s gone dead.

Nothing’s golden at a remove, silence
equals no rare metal beyond a distance.