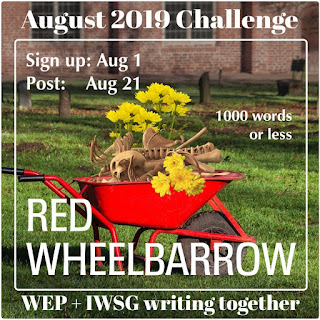 It's time to get back to Write...Edit...Publish... this month and I'm still with essays. Or memoirs, if you prefer. But there's a slight difference this time, more about that later. Here's my entry for Red Wheelbarrow...


Wheeled In, Wheeled Out

Memory is a cloud on a Himalayan slope, slinking in through the open shutters and leaving everything misted with a certain coolness, bedewed with moisture. Memory is a jewellery box, an old radio, a cigarette holder between gnarled fingers; it is a suburban house that morphs from cage to polestar depending on who is looking and if they are inside or out. It is a mossy pump housing against which pinwheel flowers bloom.  A rockfall on NH 31 somewhere near Sevoke, the Coronation Bridge on its peripheral vision. The smoke from a grandmother’s coal fired stove stinging early morning eyes. And it’s also a decrepit wheelbarrow that Matthias the gardener wheels in from somewhere with a heap of suspiciously smelly black lumps.

Memory is forever a smell – of animal dung fertiliser, of petrichor, the rains hitting parched ground in a needle thin, sharp sheet of silver. Of the bushfire crackling across the drive from the windows, of your mother spraying you playfully with Revlon’s Charlie as she completes her dressing to go out. Everybody was crazy about that perfume in those years caught between kiddiekidness and grownuphood. The Harmattan haze like teased out cotton candy falling on the bougainvillea, just like that Himalayan cloud only a different colour, a different smell, and dry as a bleached bone.

From Dover Lane to Delhi. And then wheeled across several borders and seas nearly 7000 kms away, only the world hadn’t gone metric yet so it was all miles still. When your mother told you that you all would have to leave Delhi - your school, your friends, your entire hitherto familiar world, you don’t remember being overly dismayed. Which was strange for a child, now that you come to think of it more than four decades later. But the bonds loosen automatically as soon as another home, another city, another life of a different texture dawns as a possibility on the horizon. That is what it has been like for nearly all the moves, bar one.

Memory is the name of a friend from a childhood city, a fixed telephone line recalled from another one, the exact sound of your father’s car turning into the driveway when you were thirteen.  It is an atlas first and later a spinning globe, seablue and mudbrown and icewhite and all the little countries marked out in different colours – India in pale lime, Nigeria in peach. Memory is a strange sequence of numbers and words – 18/68B Dover Lane and E-79 NDSE Part I and E-823 C.R. Park and 46, New GRA. That small white painted sign listing next to the culvert and the green 46 stencilled on it - memory is even tinier than the footprint of that sign, but still as huge as the 46+ years that have lapsed since you saw it first.

Airports in the early 70’s were more basic everywhere, at least those you travelled through. No sleekness or softness anywhere, no gleaming granite floors, no fancy lighting. Signages were cruder, functional. No barcodes on baggage - bags got misplaced regularly. A collection of hard chairs and hard floors, uncomfortable seating arrangements in less-than-plush transit and departure lounges. Planes, on the other hand, had something called legroom and seats that reclined more than 5 degrees, even in economy.

Rome had uniformed security personnel toting machine guns and an air of complete chaos – intimidating.  Heathrow even back then bristled with maps to go, the underground one was your favourite right from the first. Kano had bright blue and orange agama lizards alongside the runway, stopping to nod, nod, nod, three times in quick succession, before skittering on. So much more interesting than the drab sand coloured geckos on the walls back home in Delhi. Maiduguri was a windsock and a control tower perched on the fringes of the Sahara when you landed on 29th April 1972.

Memory is a child’s delight at finding the bottle of Coke supersized by a continent move, just like that - 300 ml instead of  the 200 ml available at the local paan biri shop in C R Park. It is the wonder at seeing the baobab illustration in a favourite vernacular story book come alive in the Sahel, so close! After the first roundabout in the GRA and then again just before the turn into the drive of 46. Something that a fictional hero might have sat under, now miraculously available within the range of your own senses, to see, to touch, to scoop out and eat the tartness of it fruits.

In the square hollow created by the garage, walkway and the external wall of the kitchen, your father planted a golden cassia sapling for shade so that future visitors had somewhere to park their cars. It grew ramrod straight, its lower branches longer and heavier than the higher ones, like a comical Christmas tree, the whole idea of shade and parking somehow gone wrong. It topped the roof and rose higher in the years you spent there. Memory is about vaguely wondering now, 46+ years later, if that tree in 46 GRA still stands, and if by chance it does – has it grown a canopy under which a car can be parked for shade on a scorching hot Sahel afternoon? Memory is all about not knowing and having no means of finding out.

In the album there's still the last photo of your family with friends come to see you off when your father was relocated out of Maiduguri. Your face reflects your misery – the only time you were beside yourself with desolation, completely out of love with the idea of a move.

The humongous North Eastern state had been carved up into three, and two brand new towns needed to be built up – from almost-villages to the state capitals. Resources in Maiduguri were allocated to the new states and your father was one such resource allotted to Bauchi. So goodbyes were said, the last bread broken, promises of undying friendships made and addresses exchanged. One March morning, NES 4579 was loaded up. You sat at the back window with an entire universe worth of resentment churning within you, your elbow against a pile of stuff teetering on the seat, held up at the other end by your mother’s help, Balai. And so you were wheeled out of 46 New GRA  and the Sahel for the last time.

I'd be particularly interested to hear your views on the second person POV in the excerpt above.  Do you think it works? Does it distance you from the narrative? Would you prefer to read memoirs in the first person only? Thank you as always, for your feedback.

Incidentally, 'Sahel' is an Arabic word meaning shore and it is used to refer to the fringe of the Sahara. The Sahel Savannah is a geographic zone stretching more than 3000 miles across Africa, from the Atlantic to the Red Sea.

This is a scheduled post as I am travelling this month. I will be reading as and when I can, but will catch up with each one of you once I am back. Meanwhile, happy reading!