You were the cardinal points, the belief

mere air could not mess my hair in mischief,

you were the map and compass, you were fair winds

and the calmest seas anyone imagined.

you were the rare skyblue that did not fade

and the staunch white roof, also the winding route,

the known and the uncharted and its pursuit.

Now you walk among the stars, leave no mark

as you come to check on yours in the dark,

I grieve and I do not grieve that you are gone –

you are never far and I am not alone.

you’ve left behind on the shelf for all of us.

They come and go, the yellow flowers

and the festivals of spring.

Grief is also a celebration

How different we were before death bloomed! –

loss, in its season, brings

Loss, too is a blossoming.

And I’ve grown my own carapace

then taken it apart,

as a seed must destroy its casing

before new life can start.

I’ve morphed to a shoot that carries

grief’s grey sap through its heart.

Holi is the Indian festival of colours observed to mark the beginning of spring. 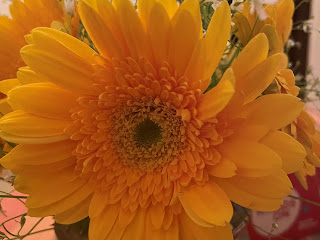 A specific slant of sunlight, mangoes,

a vase of gerberas one afternoon,

above the traffic noise below these windows

all flash your smile back to me – this shade, this bloom

was a favourite, the slant reminiscent

of your knuckles, or the words you had sent

skimming across the oceans, or the room.

every trivial thing viewed against the light

of your refracted absence – dark to bright

fanned out in a spectrum, now that you’re gone.

How does this rainbow recombine and when

or won’t I see that white beam ever again?

I forget to grieve some days because the wind

expectant, as if you’re about to step in;

the air, the entire room moulded to the shape

of your hands as they held the fabric aside;

slatted sunlight through the windows is your hand

on the armrest - I look  hard, mesmerised

till the curtain falls back  and I understand.

Some days I forget, as some part imagines

an amorphous smudge on the metal handrail

as if it recalls, recreates your thumbprint

effortlessly in gripping but blurred detail.

Your slippers with your toe marks on the shoe rack

disarranged - as if soon you’ll be coming back.