What you thought was home turned out just a path,

and what you took to be a journey, was home,

paid little attention to the maps and maths

and now you’ve no-one but yourself to blame

now that you’re so geographically doomed.

It’s not just a casual photograph

bleached out on a whim, pared to monochrome,

and surely not a thousand and a half

attempts at so called half draft of poems -

a whole heap of things that can’t be consumed.

Neither the doors nor the compass was yours

you let them possess you more than they should,

when you turned there were no wakes left, no shores -

Some weeks are darker than others

some fortnight’s just shades of agony,

the distress of fathers and brothers

is hard to stand witness and see;

but every darkness gets over,

some sort of lightfall. Clarity.

Not all light must be a sunrise,

Sometimes the dark is a disguise,

for light’s got degrees and avatars -

lift up this face and recognise

light and darkness for what they are.

Keeping it spare for Write...Edit...Publish...  Lite as we start off year 2021. Back to fiction with a fractured something...an old write repurposed because it fit the prompt.

He had stalked me for days. His lips were rubbery, too large, too wide open, hot-wet and slimy.  Gross didn’t begin to describe it.  He was taking his time too, as if he was wooing some swooning heroine in some crazy version of a Brontë romance.  The worst kiss ever. And his limbs were like bloody suckers, I pushed at him hard but he hung on like one of those tree-huggers. How could this be happening?  Why had I allowed it in the first place? I groped for the knife, found it and slashed upwards. He broke away with a repulsive sucking sound that made even my toenails curl.

I sat up, my chest heaving, my heart beating a frantic tattoo against my ribs.  My head swam with a potent mix of emotions – disbelief. disgust, outrage, abject terror.  I shut my eyes and tried to get a grip.  When I opened them again, everything was quiet.  Moonlight came in through the blinds and lay in deep slices on the floor. I could see vague dark stains on the bedclothes, they were twisted around my torso in a python-coil.  The rest of the room was strangely and chillingly untouched by the upheavals I had just experienced - my clothes were still on the pegs, my books as I had left them on my desk.  Only Toddy had fallen out of the cubbyhole and lay spread-eagled on the papers.

I untangled myself slowly from the snarled sheets.  Piled the pillows behind my back and half-lounged against them.  Not to sleep for the rest of the night felt like a sensible decision.

“Now don’t start that again, Dits,” I was not particularly taken with the clumps of teddy bears and alligators and giraffes the vendor was hawking in the train.  She was obsessed with soft toys.

“Oh, yeah? One last time?” I was skeptical. She said that every time. On every trip.

The vendor meanwhile had spotted a pushover and made his way to where we were sitting. He pointed out the awesomeness of his wares with exaggerated, faintly effeminate gestures, adding fuel to an already blazing fire.  I gave in, it was useless to resist.  Deal done, Aditi sat back with a sigh and a smile clutching the toys as though she were five instead of twenty-five.

“Oh, they’re just too cute. Don’t you love this vest?”

“What shall we call them?”

“Are they frogs or toads?”

“I don’t think frogs come in that muddy colour.”

“I know,” Aditi said with the air of someone having an epiphany, “Toddy! Let’s call this one Toddy. And this can be Muddy.”

I woke abruptly.  Daylight was streaming in at the window. The clock on the night-stand read 6:16, the dots pulsing each second, like a pair of blinking evil eyes. A flock of crows had started up their raucous commotion somewhere just outside.

My mouth felt like a dozer had smashed into it.  My whole body was a disaster zone, as if it had come through a wringer.  Every bone ached. I flung the bedclothes back, there were weird dried stains on them.  There was no time to change the sheets.  If I didn’t hurry, I would be seriously late, the pick up came at half past.  I briefly wondered what kind of night Aditi had had. I pushed away the thoughts that wisped unbidden into my mind.  No, that was beyond crazy. I shuddered. Was I going out of my mind? There was little time to ponder, and the workday soon pushed the night’s events out of sight if not completely out of mind.

I saw it when I came back from work and went to lay my bag down as usual.  He wasn’t on the desk, not inside the cubbyhole, not where he had fallen on the papers last night, nor on the floor underneath.  Not anywhere visible in the room. Scrunched up on one side was the vest, slashed open in a ragged cut where the knife must have gone in and caught the seam.  There were dried bloodstains on the vest too. Mine? I swatted away the thought they could be anyone else’s.  I picked it up and smoothed it out.  The front, I had never really noticed the front. It was the back that was constantly on view as he sat low, squat and fat on all fours.  The writing glittered, still undamaged, the words gleaming in the last of the daylight.  Prince, in disguise. I read them again.  Mouthing the words like a child learning to read.  Prince. In. Disguise. 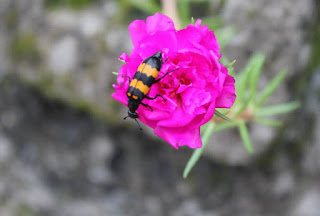 What makes a garden – the gardener or the vine,

the squirrels that dig it up, the birds that peck fruit,

the weeds which spontaneously undermine

the efforts of the cultivated to take firm root?

Is this still a garden? – if those weeds flower

and they’re smaller, less showy than the marigold,

if the wild grass were to wholly overpower

the careful beds and furrows marked by the household.

And if the bees come calling but so do the bears

what’s fertilised and grows is not quite by design,

of the nectar and honey and fruits and sunshine,

if the yield’s not consumed by designated humans

is that just a pity? a waste? or a garden?

Directly inspired by Yolanda Renee here. Hope all goes and grows well in your garden. Happy V-day to those celebrating.

One day, you know the world will restart

and all that’s slipped will itself restore

to a new order, a fresh, new heart.

The regimens of outdoor and indoor

will change again as they’ve in the past

and we’ll be free to take to the roads

without any temperatures asked

except maybe of the weather gods.

So be patient – wait for the needle

to straighten itself and to point true,

but steel aligns to the magnetic.

Some will drop but not all the people

hopefully among them me and you 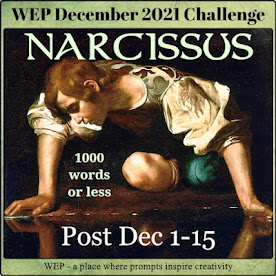