That silhouette is a little familiar

When the panic is a blinding red haze,
and the hour flaps like a hollow windsock -
the meanings stand out, crisp, articulate,
above the din and win and lose of days,
in dark silhouette against empty talk.

I’ve recognised the meaning of happiness
from its outline, from a flimsy shadow,
its features indistinct against the wash
and thresh of light, but clear nevertheless
its final form, though the face didn’t show.

I have known it mostly by its absence,
the deeper when the cut’s been the sharpest.
When grief has sliced me small and wide open
I’ve felt it keen within touching distance,
mere feet away, a still shadow at rest.

And in that flare of time I’ve been content
to see its frame and infer what it meant.

Okay, so that's 'happy' done.  January's been a tough month all round.  A good month, therefore, to explore that particular theme.

February is a Write…Edit…Publish month, sign up's on the 1st. Here are the challenges for 2017, must get thinking soon.  Back of the drawer - might be a good idea to actually pull one open and see what lurks there…who knows where that might lead... 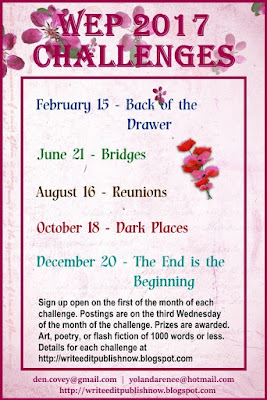 A collapsed chrysalis -
the empty casings
of vast possibilities

One incomplete sentence
and the story arc
connecting the silence

Coffeefroth that mimicked
hearts before dispersing
as the drinker blinked


of an early morning

Threads of smoke-mist
over the skyline, cities stretching
themselves awake

The little button fruits
in pavement cracks in an
unknown neighbourhood

The diamond that turns
out a pebble, speckled like
a birds egg and earth

Still exploring 'happy,' and personally, nothing like the touch of old Mother Earth for that happiness fix.


This alone, the depths of afternoon, lunch
prepared and consumed, the repletion paired
with the emptiness of hours, offhand warmth -
somewhere in it - contentment is layered.
I know you can’t forget the avalanche
forecast for tomorrow, nothing halts midair,
not a single snowflake can be turned, changed,
persuaded to retreat or fall elsewhere -

every drop and flake reaches where it’s meant.
But today a pale faced sun lies languid
on the stubs of grass beyond, no portent
mars the skies, the road runs quiet on the grid
and streams and times are silvery, quite fluid.
No grand sweeps, happiness is a moment.

There seems to be some sort of epidemic of French titles around here, I've no idea why or where that's come from.  I do NOT speak a word of French, much as I am fascinated by French stuff (that's art and short stories and long stories and food and beverage mostly, before anyone gets any ideas...)

All this month I am trying to write 'happy' and failing generally. However, I have managed to steer clear of exclamations.  And emoticons as well.  Serious success. That's happiness enough for the time being, I can live with that. 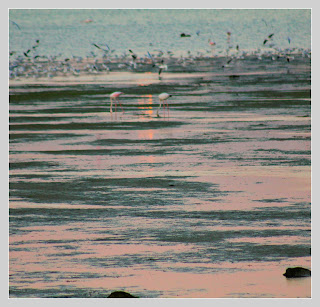 They are far out, walking the promenade;
and returning flamingos group in the bay -
the pulsing reflections of pink and grey
are an echo from sunsets past, the mud
exposed at low tide, shimmery with facades

of buildings and a too early neon ad.
A woman runs, the winds billows her robes,
tugs her scarf askew, the last sunlight probes
contours of waves and time, breathes and shreds
itself on lampposts, glow-in-the-dark keypads,

headlights, taillights, sodium yellow and red.
There are small spaces carved for fluorescent
twilight shades, the impossibly transient.
The father and son, small figures are dotted
on the grey paved concrete thread far ahead.


Still trying to pin down definitions of happy and happiness. I know it when I see it - unmistakeable. Have a happy week ahead.


Hello Happiness! Hello, Stranger!
I knew I’d recognise you straight off
even though we’ve never met – it’s been rough
for the longest time, yet I wonder

if you’ve had it smooth? as smooth as you’d like?
It can’t be easy putting on that smile
day after day, pick a base, decide
where to stay put, when to go; mostly life

upends the anchors when least expected.
Humans make poor hosts, their own innate drive
is to prod things. They compel you to leave.
Are you happy with being a nomad?

I at least have the thin pretence
of freedom, and love of this existence.

I don't do resolutions but I started the year with a vague sort of goal - 'minimal exclamation marks' and well, that didn't last long, did it? :) Shot to pieces ten days in.  And even when the prompt is 'happy' - yes, the real actual word - and I start out determined to write something upbeat and positive and merry..... aaargh! No pen control. So frustrating. Is it just me? :)

Maybe I should add emoticons on the minimal list too...on second thoughts...

In my house there are a hundred half-done poems

to fling the whole purpose away, start again.
Nothing feels it’s honed to a polished end,
tightened so well that it won’t spring open
next season, at the touch of buttons. Fattened
enough for blades. Lean enough to be deadened.

A hundred of them precarious, unravelled -
each memory in its groove wrongly filed;
some thumbsore, others ignored, mishandled.
The woods and cells and walls poorly styled,
imperfect the rhymes and rugs, unreconciled.

Nothing finds a closure in a short lifetime -
the entire house left open by a crack of rhyme.

First thing in the morning today I read about Om Puri passing away, and the title line which is from a famous Mary Oliver poem called 'Thinking of Swirler' flashed into my mind. And that line kind of ambled into this poem. A sonnet-ish form of my own, with an extra line after each quatrain. Fattened, if you like, ready for the blade.

'Each of us leaves an unfinished life.' Indeed.  Om Puri was a favourite in my cine-going days in Delhi, when I frequented the Indian Panorama at the film festivals, because they were the cheaper tickets - available for two-three rupees each.  The foreign films too of course, as many as I could afford. Om Puri was starting out those days, and rose to a major force in Indian Parallel Cinema. I remember some mesmerising performances by him - Aakrosh, Ardh Satya, Jaane Bhi Do Yaaron, Sadgati, he was flawless in every film.

As I left India mid-nineties, my relationship with Indian Cinema became a little distant subsequently.  I haven't watched any of his later films, but I have followed his career. Beyond saddened at his passing, and a little shaken too - has the loss of Western artistes that characterised all of 2016 somehow infected India now??

Mr Puri, you will be sorely missed.

a rainbow in a small oil slick,
preserved daisies in books;
flamingos clustered close and thick
somewhere behind the souqs.

The gentle turns of planets, years,
seamless the season’s bends,
the random points marked on a sphere
for beginnings and ends.

Wishing all here a fun, creative and positive 2017.  I got an email greeting which said 'may your happiness break all previous records' and I'm shamelessly plagiarising that. Record breaking levels of joy - that's my wish for you this year. Stay blissful, stay well.