Thinking back to childhood, long time ago now, I can’t remember any monsters…all very fuzzy…The only thing that I remember being seriously frightened of were masks - they gave me the heebie-jeebies.  The fright quotient tapered off as I grew up - I now have a corner with several of them. But I am still disturbed by the less literal masks I come across sometimes as an adult.

Welcome to the Halloween Scarefest of Write...Edit...Publish, hosted by Denise Covey (who has just published her vampire novella! Congrats Denise!) and by murder-mystery writer Yolanda Renee.  Read the rules here and join in the Halloween fun!  We are talking about - 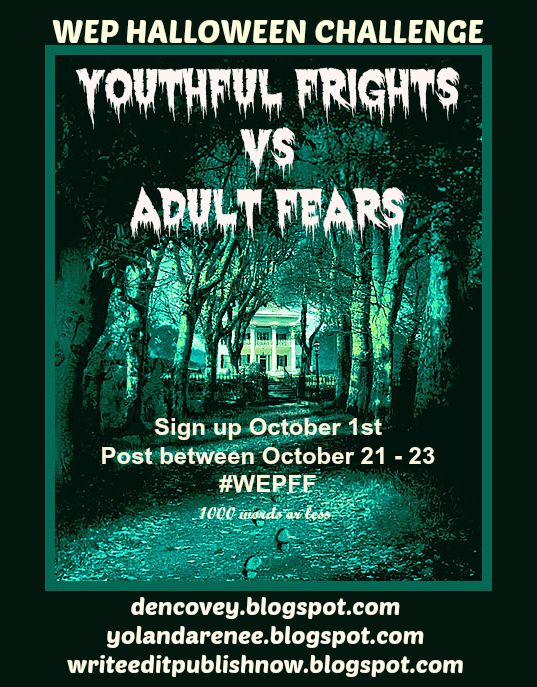 I also can't really recall any scary stories as a kiddie kid.  The truly, memorably disturbing books came in teenage, my very first was Rosemary’s Baby - blew my youthful self away. Sometime after that, I was given an edition of Maupassant’s Collected Short Stories, got acquainted with Le Horla.  Oscar Wilde’s Dorian Grey; Edgar Allan Poe.  Much of Daphne du Maurier's super-subtle tales – Rebecca, Jamaica Inn, The Birds, Don’t Look Now, Not After Midnight – became firm favourites. A lingering sense of menace in ordinary stuff has always spooked me, fascinated me more than anything else.  I loved titles like Graham Greene’s The End of the Party, Roald Dahl’s The Landlady, Stephen King’s The Road Virus Heads North….Of course, if Stephen King is mentioned then one cannot overlook The Shining. Deliciously, excruciatingly horrifying.

"If...terrible occurrences were acts of darkness they might actually be easier to cope with. But instead of being dark, they have their own brilliance…To look directly at such brilliance is to be blinded, and so we create any number of filters.  The ghost story, the horror story, the uncanny tale – all of these are such filters."

My flash here grew out of a recent news item I came across, on new mothers selling their excess milk through the internet rather than milk banks, and a fragment of an ancient epic embedded into every Indian child. Reading and writing are certainly my own filters, I look at the hard brilliance of every fear through it, process life events big and small.

Piyush looked down at the phone, there was no mistake.  He had come to the right address, only it looked like no-one lived here.  Beyond the wrought iron gates, the garden was overgrown, the windows were shut and dusty with the accumulated dust of many weeks.  He hesitated before he unlatched the creaky gate and pushed in.    It felt lame not to try the front door once.

But the door jerked open before he reached.  He stopped, unnerved by the suddenness and the appearance of the woman standing in the frame.  She looked older than he had expected, light eyes with narrow pupils, flecked with blood-red, deep burning embers in large sockets; the bones of her face altogether too prominent, the brow jutting, the cheekbone too high and gaunt for beauty, the chin and jaw square, forbidding. Piyush felt exposed under her steady gaze.  A sudden qualm, a stabbing regret that he had not turned back when he had the chance.

The hallway was surprisingly clean after the grounds, the sitting room orderly, no traces of dirt or neglect here. His shoulders unclenched in stages of relief, the level of his own stress dawning on him for the first time. The past few weeks had been tumultuous – the chaos of his emotions, the household in sudden confusion.  He had come upon this advert on the web – the sales pitch factual, crisply effective, an emotionally supercharged product sold in two or three lines of text. He had not thought much about the ins and outs of the matter and called. Formula did not make for happiness. That was a given.

The room was sparsely furnished, a sofa and a couple of armchairs, a small table, a narrow, long ottoman against the far wall opposite the door, no curtains on the large windows. No knick-knacks, no china, not even a table lamp anywhere.  Above the ottoman was the sole concession to décor - a set of masks.

They were not the usual tribal or theatrical masks, things of ceremonial dances and flamboyant colours.  His brain registered what his eyes were seeing with a tiny, shocked lag.  They were replicas of infants’ faces.  Seven masks made in the likeness of human babies.  Perfect in every detail from the strawberry marks on the forehead of one to the suckling blister in the upper lip of another.  Something strangely repulsive about each, less than cherubic, the eyes - were they glass? -  looked horribly old, the skin had crinkled in crow’s feet around them, the expression desperate and knowing at the same time, disquietingly tired somehow; they looked like old men, parched and papery - some trick of the light and glass.  And was there a faint resemblance somewhere, the same strong squarish line of jaw, the same thrust of the forehead? Or was that too, a trick of the light? Piyush was rooted to the spot, mesmerised, a sudden sharp unease clutching again at his midriff.

As he watched, the insides of the cases slowly began to blur, much like a snow globe gently shaken.  A flurry of flesh coloured fragments swirled around, faster and faster, and he realised with increasing horror that there was something liquid in there, the masks had been pickled. In a few seconds the cases were obscured, the masks appeared to be disintegrating in front of his eyes.  It seemed to Piyush that he had stood here forever watching these fragments of tissues whirling around.  By and by the bits gradually slowed down and reconfigured behind the glass of each case.  To a place and time that seemed disconnected with every realm of possibility.

A riverbank, on the distant horizon a low flat pink palace, a dust-coloured oblong blob marking an ancient city.  The water muddy and wide, silky-slow, its edge crowded with a thick fringe of reeds beyond the ghat. A woman with a mewling bundle on the last step thrusting it into the waters where it kicked and thrashed feebly and then went still.  She took out a sharp ornamental knife and carefully cut around, then peeled off something and threw the bundle back into the waters.  The cloth fell away and finally exposed the flayed faces of the infants, seven drowned newborns in seven cases; pink raw flesh smeared horribly with blood that swirled in the water and clouded up the glass, dissolved everything inside into a terrifying, obscene red haze.  His gasp was choked in his throat, he swayed on his feet, sick.

“Here's the milk, and the reports.  No HIV, no drugs or booze.  I like to keep things…clean.”

She had come back silently while his back was turned to the door.  The knot between his shoulder-blades was immeasurably tighter, sweat was trickling into his eyes, he could hardly see. He tried to calm down, blink away the sweat and surreal scene from his eyes. His nausea threatened to spiral into terror.

He paid the exact amount, he did not want to linger for the change.  Weird now, this transaction, the notes crisp in his hands -  money for human milk.  He shot a glance at the cases again, the masks were back in place, impassive, still, the glass clean. As if nothing had happened. He thrust his right hand into his pocket and wiped the clamminess out.  But the tremors he could not wipe away, his skin that prickled into goose-bumps. To his relief, the woman did not offer her hand.

The distance between the front door and road was covered in a few huge strides. As he turned the corner, he fought to bring his panic under control.  He dumped the pouches in a waste-bin a few streets away and stumbled on, his vision clouded with a red streamer slowly dissolving in a muddy river; his hands still unsteady as though they would never again shake their tremor off.

A few words here about the Mahabharata - which is an Indian epic written some 2-3000 years ago, rather an involved and complicated story of dynastic struggle for power.  Somewhere in the beginning there is this tale of a king falling desperately in love with a beautiful woman.  She agrees to marry him on the condition that he will never question anything she does.  And then she proceeds to drown their sons as soon as they are born. Kind of like Moses's story in reverse. Seven times she kills the newborn princes, the eighth time the king reaches the end of his tether and asks her why, so she lets the prince live but leaves her husband because he had broken his vow.


ghat - paved steps on a riverbank leading down to the water. 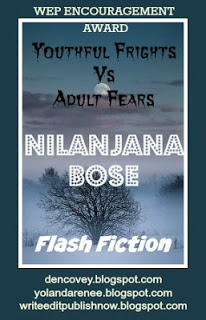