It's the final month and the final prompt, 'the end is the beginning' at Write...Edit...Publish, hosted by Denise and Yolanda. I'm posting an abbreviated version of a long story, and posting super-early as I'll be travelling over the holidays - I'm not sure if there will be a WiFi available.


Shankar is a school drop-out who's left the village, drifted to the city and into petty crime. He has been picked up by the police on occasion which has led to an aversion for uniforms and bureaucracy. He escapes a police raid and goes back to the village to avoid the lock-up, but ends up in a different cell anyways.


Btw, a Daffadar is a rank in the Indian Army, equivalent to Sergeant. 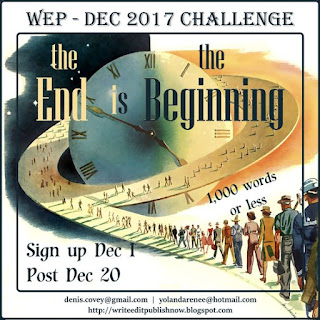 
Shankar ignored the announcements till he heard that the army would evacuate everyone. He had narrowly escaped a police raid in the city and was badly shaken still. A week back in the village and the cyclone warnings started.

Why unleash the army on the village before the storm?  That was unusual. The army normally picked up the pieces. Shankar had a healthy fear of any uniform, army, police, postmen, all highly avoidable. He threw together a few things and went out. He knew just the cave where he could wait for the storm to pass. Not going anywhere near officialdom, not he! And even the grandfather of all cyclones could not get at him inside that hill.

The force of the winds took Shankar by surprise. They roared and wailed like a huge demonic crowd, felling whatever came in their way. Even deep within the cave, Shankar was pounded by its power. Water trickled down the rock walls in a million tiny torrents, churning on the uneven floor – a small maelstrom mirrored the external storm inside the cave.  It went on endlessly, the downpour and the raging winds. The sun set somewhere far away above the rainclouds, the last dim light faded. Shankar switched his torch on at intervals, afraid to exhaust the batteries.

Halfway into the second night a huge, long crashing wave of sound pierced the cave. He felt the impact jarring right through him, the gust of spray suddenly cut off. The noise of the storm suddenly receded somewhat, tapered off into a weaker version of itself. Shankar switched his light on, was the beam getting yellow? and directed it towards the cave mouth.

A large tree had fallen, catching other, smaller trees in its naked branches, interwoven into a monstrous tangle. Mud and rocks jammed the tree solid against the cave opening. Shankar pushed the trunk with his free hand, it did not give. He dropped the torch and shoved with all his might, nothing budged. The light rolled around on the floor, the beam swinging wildly. He caught it as the last of the yellowing beam flickered, then went completely out.

He slithered down and sat in the darkness, disjointed thoughts racing through his mind. Why had he not foreseen this before running headlong into the cave? He wallowed in self-accusations, swinging between maudlin and resolute. If he ever got out again, please God, he would never again do anything wrong.

The rain finally stopped. The dawn broke somewhere beyond again, the gloom lightened by a shade. And still Shankar sat mired in fear and self-recriminations, frozen to the spot.

Shankar gradually became aware of a new sound, muffled by distance and by the corked cave mouth. He sprang upright, galvanised. Of course! It was a helicopter. He leapt to the cave mouth, screaming and yelling, pushing against the trunk with all his strength, the fear of uniforms forgotten. Nothing moved. No, no, he must find something else, some other way.

Shankar felt along the trunk sideways till he felt it fork into two, the gap was matted with other debris. A pinhead of light showed through, less than the width of his little finger. He groped and picked up the longest broken branch he could find. He took his small penknife, tore off a patch from his sleeve, knotted the knife securely to the end of the branch and worked it into the hole, twisting and turning it desperately. The fabric snagged halfway through, but he kept thrusting forward till the cloth tore free. A minute later his probe came to a stop, caught against some solid barrier again. He paused and reined his panic in.

It would not do to lose the knife now, or worse still, break the branch. He jiggled the tip around, coming in at a different angle every time till he felt it push into a crack underneath. A few minutes more of steady pressure and it broke free!  He was through!

How much of the ‘signal’ had breached the barrier? Was there enough shirt left for anyone to spot? Would the chopper come back again? There was no way of telling.

Daffadar Singh surveyed the scene from the end of the road. Everything had been flattened. Nothing impeded his view from here to the mountain. Which had lost most of its vegetation. Fresh rockfalls and mudslides scarred its slopes. It was a devastation the likes of which he had never seen before.

As he was about to turn away, the smallest flicker of movement, a mirror-gleam halfway up the mountain, caught his attention. Singh put up his binoculars and scrutinised the spot, his heart suddenly racing. Out of a jumble of rocks and trees, poked a slender branch tipped with metal, a strip of material tied behind it. As he stared at the slope, the metal gleamed briefly, it was the flicker that had caught his eye.

There was no way that flimsy bunting could have survived during the cyclone, so it must have come after. He set off at a sprint back towards his truck. The helicopters needed to get here on the double.

Shankar became aware of sound and movement. He opened his eyes a crack, the light was blinding. He closed them again, but not before spotting the camo-ed backs walking in front. Uniforms!

Oh, he was so tired. Tired of running from uniforms, from the big-fish-eat-small-fish cycle of crime and lawlessness. If he ever got out of this, he was not going back.

A smiling head poked around, “Oh, you are awake. That’s good. Let’s see.”
Shankar felt fingers on his forehead, “How are you feeling? What’s your name?”

His mind whirred overtime. There was nothing to identify him on his person. No papers, no cards. No phone even, forgotten in the rush of escaping the city.

Tomorrow he would melt into the crowds. It was, perhaps, a beginning.


Thank you as always for reading and your inputs.


And so closes 2017 - and what a year! Worldwide natural disasters, gratuitous manmade crises, and my own personal ones - boy, am I glad to see it's back! BUT... in every end is a new beginning. I'm sure things will either get better, or I'll get used to the chaos :)


Seriously though, 2018 has a whole new set of adventures as well as prompts, see you there people!

I am away travelling from the 15th and most probably won't have Wifi, so I will catch up with you once I am back. With best wishes for a Merry Christmas and/or festive season, and for a superblessed and fun 2018, 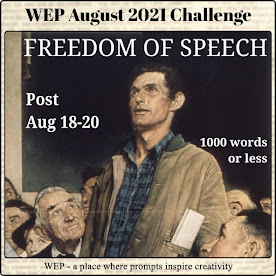