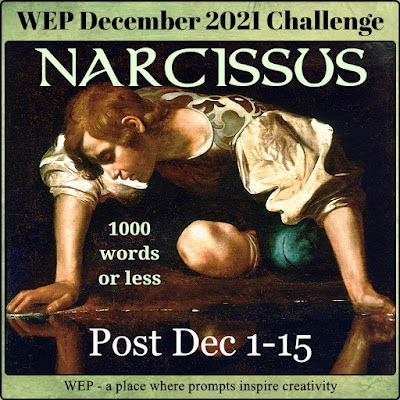 Hi, folks! I have been a stranger to my own blog for the past few weeks :)  Life offline has been super but super busy too -  niece got married last month, big fat Indian wedding - lipstick on my party masks and all that, anyway that was pencilled in long back in the planner.  But also there was a sudden breakthrough in the matter of the parental property, did that consume a whole heap of time or what? Upshot - stranger to blogging! - life can spring pleasant surprises and rev up even during a miserable pandemic with never ending variants.

Anyway, here I am for the last 2021 gathering of the WEP clan. With another retelling - this last a Greek classic.

Let me also take this chance to wish you  peace and joy and a merry Christmas if you're celebrating. To your good health and the world's for the remainder of 2021 and to better times all around in 2022. Check out the Challenges 2022 page for even more luscious prompts in the New Year. Keep fit and keep writing. See you there!

I and the public know,

What all schoolchildren learn,

To those whom evil is done,

Do evil in return.

Once upon a time and place far away – but close enough still to rattle, so don't get too comfortable  – once upon such a time and place, an unclaimed child grew up in the blind lanes of human indifference. Like a weed he took root in the cracks in the paving stones of ruthlessness and grew on a staple diet of mockery and offhand cruelty – daily kicks and cuffs and brushoffs. He was soon adopted by a petty vendor on the lookout for free labour in exchange for the meagrest of keep.

As he got to his teens, the vendor, the closest thing he had known to a parent, died. But he had learnt by then to be agile, hardboiled, forbiddingly spartan with a suppressed but ferocious grudge against society. A right wing organisation’s talent scout saw his potential and scooped him up. In their camps, he was honed fine and keen, ending up dagger sharp, primed with a gunpowder hate and an over-developed instinct for self-preservation.

Painstakingly, patiently, year by year, rung by slippery rung he pulled himself up through the hierarchy to reach the top – block, subdistrict, district, division and then in a sudden explosive outcome, the state itself.  As his third decade closed, he won the assembly, the youngest ever to do so - wresting control  from the long serving incumbent in a landslide. His early experiences – the deprivation of his childhood, his rigorous internship in the at the grassroots volunteer camps, came in handy. He was the underdog, seemingly connecting with everyman. The story of his success had no detours through formal education or established rags-to-riches motifs. His thick, rural, unschooled accent completely charmed common people. His anti-establishment stance, his sneering dismissal of the old guard, his scaremongering outsider-versus-insider tactics tapped into the deepest insecurities of people. His bursting upon the scene like a messiah felt like a divine promise. The population was mesmerised, giddy with the elixir. From there it was but a small step to dream of the top job.

“Get me The Daily Dipstick,” he asked the new assistant. He always insisted on getting in one raw recruit, preferably underprivileged and undereducated. Went down real smooth with the masses, though it tested his patience considerably.

“No, no, Dipstick! Don’t you young lot read newspapers?”

“Yes, but...our newspaper is the The Light at the End of the Tunnel?”

“Listen, my child, LET is our mouthpiece, it will never write anything to offend. If you want to know the truth, read the Dipstick. It’s tiny and unknown, but it matters.”

“But, Sir…the polls have been showing you numbers…erm…excuse me, Sir…dropping,” he lowered his voice involuntarily to a whisper.

“Yes, yes, I know,” he gestured impatiently, “but that’s not really important.  Are my numbers not above the others still? That’s what you should focus on – your opponents.”

He hooked a finger, the assistant bent closer obediently. “That’s the bottom line. If I’m dropping, then none of them are doing any better. That’s enough. Where the opposition is will make or break you. Now stop fretting about the numbers. Get me the Dipstick and that speech for the rally. What’s the slogan?”

The leader looked into the assistant’s eyes and saw in the young brown irises two tiny reflections of his own face. Both instructor and protégé smiled.

The rally had drawn a massive crowd and he played upon it as a maestro plays and holds a note of the violin.

“For one thousand years, invaders and usurpers have ruled us, taken away our lands, taken our lives, crushed the dreams and aspirations of our children. Will you let that continue?”

“No!” The crowd screamed.

“Only one party, one strategy, one person can lead us out of this perpetual injustice into the saffron light of a new dawn. Someone rooted in this soil, not a Johnny-come-lately invader. Someone who has your interest at heart, holds your priorities paramount. Only one person. If not he, then who?”

“If not he, then who?” the people thundered.

“Do not put your trust in silver tongued elites who rob you of your future. The ones who wear silk undergarments over their rough homespun, get foreign degrees, fritter away your money on foreign mistresses, treat  you like a second class citizen in your own home. They line their own silken pockets while you starve and go barefoot. They appease minorities while you are swamped. Don’t put your trust in their empty promises. Don’t make the same mistake over and over again. Trust the one who has struggled and knows your struggles intimately. If not he then who?”

And the lights blazed down on the parade grounds, the huge LED screens amplified his face and voice and spilled into the cities beyond. And each person who heard his speech on the loudspeakers or later on the TV,  had a niggling little seed planted in his heart – was it true? Did the old guard really wear silk underwear? Did their corruption have no bounds? Will we really become a minority in our own land if we carry on this way?

So from rally to rally, from screen to screen, from one sea of people to another, the reflections rippled out in ever-widening circles snaring citizens in their loops, in a perpetual cycle of falsehoods and propaganda. And Narcissus fell deeper and deeper in love with his own images and the sound of the crystal clear reproduction of his own voice on the sound systems. Fell in love with a parallel world of a phantasm of his own creation. And the nation too, hungry for hope, desperate for change, fell headlong in love with it. Till they lost all power to reason and became a thin echo of their former self - from a robust, vibrant democracy reduced to a mere cult, whispering, “If not he, then who?”

Tagline : Narcissi will grow in the most unexpected of places.

Read the other entries here :