It's time for the Write...Edit...Publish... challenge hosted by Denise Covey, where she invites us to write/respond to a monthly prompt. This month's prompt is Changing Faces.  The details are 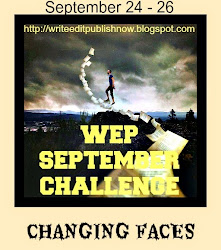 FLASH FICTION, POETRY, NON-FICTION, ARTWORK, PHOTOS
OPEN TO ALL
Open to all genres - Fiction works can be - Adult, YA, MG. All entries maximum 1,000 words.
PLEASE LEAVE A COMMENT WHEN LINKING UP.
Email Denise if you have more questions:
den.covey@gmail.com
You wake up, look in the bathroom mirror, and a different face looks back at you.


My entry is a flash, an excerpt from a much longer story.

The water felt unusually cold in Pratik’s cupped hands, and even colder against his shut eyelids.  He quickly found the towel, and as he emerged from the folds, his eyes fell on the mirror.   The shock was unnerving, though this was not the first time.  He dabbed his face again, and scrutinised it closely.

The changes were subtle - his eyebrows arched now at a minutely different angle, his earlobes sat flatter against his head, his lips were narrower, the jaws a shade wider, and the stubble on it a darker chestnut. He looked down at his hands, the veins were corded, the skin flaky, the fingertips squat, squarer nails, and rough.  The forearm shorter somehow, bulkier than his; limbs of an older person, older than his twenty-eight years.  He looked back into the mirror, and shuddered.  The eyes were the most frightening of all, a different person looked out of them and back at him, ruthlessly cruel eyes, without a shred of compassion or humour. Just like a serial killer's, he thought wryly.

He came out and sent a text to his boss, working was not an option today. Panchali was still asleep, she smiled in some dream as he looked at her and wondered how to break it to her - this sickness in his brain. She sensed his presence and half woke, reached out for his hand, and clasping it, smiled wider and went back to sleep.  He had planned to talk about their future this coming weekend, but now - he sighed, sat next to her and tried to untangle his thoughts.  Perhaps this part of his life was better witnessed first-hand rather than heard narrated?

He woke her gently and told her, there was no time for details, just broad outlines of what to expect.   Her sleepy eyes flared wide in surprise but then became attentive as he spoke, his words urgent and slightly incoherent.  She shut her eyes and listened, touched him as he talked, ran her fingers along his jaw, traced the curve of his ears and eyebrows with her index.  The rigor started even as his words petered away.

Still with her eyes closed she kissed him lightly and said, “Your voice is just the same, did you know?”

“Of course,” she threw back the covers and rose, a swift fluid dancer’s movement like a swan taking flight.  “I'll get some coffee.”

He lay on the bed, shivering uncontrollably with his eyes open, conscious but unseeing.  The tinkle of spoons from the kitchen slowly faded.  The sounds of the city coming awake outside - the auto-rickshaws shuttling the first commuters, the loud airhorn of a bus, three notes of a conch at a neighbour’s shrine, tram and temple bells – all receded and regrouped into sounds of a different time and place.

It was quieter, only the lap-lap of water licking banks, punctuated occasionally by the faraway rhythmic slap of oars pulling away from a pier.   The lane was half as narrow as the canal it bordered, the cobbles slippery with rain fallen earlier.  Sparse lamps and shafts of light from the odd window shimmered, reflected in the oily waters, but lost the battle against darkness.  He walked quickly, primordial rage and hate roiling inside him, walked so as to leave the torment behind.   Was it his fault that he was made this way, misshapen and crooked?  He was stronger than two men, and could outperform many even with his dwarf’s hunchbacked body.  Yet no-one would give him a job.  He was a knife-thrower, reduced to a monstrosity, a butt for jokes, shunned, at most tolerated, a demeaning spectacle his only livelihood.

Four rough men stood chatting ahead, barring his way.  Pratik stopped a few feet away.  One of them turned and looked, another said, “Byata kooNjo*” and all of them guffawed.  His rage spun into a red hot fireball, and his hate was a sharp dagger twisted in his side.  He drew two knives from his waist, and threw them with unerring aim.  One of the men fell with a gurgling sound, the other screamed and toppled into the canal.  He ran and rammed his head into the next man, hitting the midriff, winding his victim and leaving him gasping for breath on the ground.


The last man was on top of him now, both locked into combat.  He fended several blows, but could not bring his opponent down.  A deep breath and he launched into the man with his left, a powerful blow that made the fellow stumble.  In a split second he reached down and pulled the last knife, but he was caught in a melee of limbs, the winded one was up now and they were two against one.   Pratik slashed viciously and felt the knife plunge into soft flesh.  The nearest man let out an animal squeal and Pratik pulled out and half turned on his ankle and slashed upward with the knife again and felt the blade slip into flesh and the warm rush of blood over his wrist. The last man crumpled and lay in a pool of light from a street-lamp.  Pratik saw with a stab of sudden panic that it was his own face under the light, his unaltered face he saw every day in the mirror.  He moved closer, his heart thudding, but his feet scrabbled on the edge and he fell and knew only the blackness and coldness and the smell of the canal.

“Well, not exactly the best half hour I have had with you, but it’s okay, you didn’t kill me.”

“No, I killed somebody else.”

“I killed men.  I was a dwarf, a monster, a psychopath.   I re-live events again.  Go back to a past life somewhere. It bothers me.  How much of that previous me spills into this one here and now?”

“Listen darling, I don't know about spills and splashes, but in this birth, you’re you.  Pratik Sinha.  And you’re mine. Don’t dare forget.”


Read the other entries here and join in:

get the InLinkz code

And I am celebrating the 300th post in this here blog soon, with a guest post from a very special poet/blogger many of us know - Adura Ojo.  Don't forget to check it out.