Point me to Write...Edit...Publish 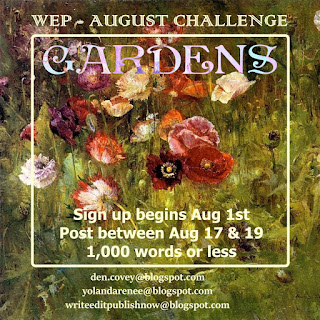 It’s August and it’s time to make my way back to Write…Edit…Publish even as I pack up after the home leave and return to my second home, which is actually the first home because that's where I am most of the year.  WEP, hosted by Denise and Yolanda, is where we gather to share and hone our creative skill sets - mostly writing, but wide open also to other artforms/interpretations. Click the link to find out more. And jump in with your take on the prompt if you like.


The prompt this time is 'gardens' and I am back with another of my experiments in poetry – this one a 14X14, a series of 14 themed sonnets. Only the word limit means fitting in 10 and not the entire 14. Which matters not a bit, because each part is complete in itself and can be read independently on its own as well as part of the series.  And my treatment of the prompt deviates from the suggestions by the hosts in that I am not talking about any one garden in particular - this entire earth is a garden and I am beyond thrilled to be in it, whatever the landscape, whatever the season, all beautiful, all good...except when Man gets too smart and messes things up big time.

Point me to the earth, always, always,
even one thousand years later,
when all you have is some fragments
and this yellowed, sparse dust of paper.

When words have lost their hundred tongues,
cities have plucked their hundred streets
and thrown them like javelins straight and hard,
when the meek come to leash the elite;

the smoke from rocks is tightly curled,
the sun’s lava a wrinkled-skin moon.
The skyscrapers have their yawns shushed
but still silence won’t carry a tune.

Point me to the Earth even then,
to lost wildflowers, fossils of pollen.

Point me always to the horizon,
grind me small into the wild gardens
even when they’re wholly paved over
by old snowflakes and stonemasons.

When the trees have shuddered off their leaves,
when the only bird is just a clock
and time has stumbled into its own crease,
and can’t move or turn on the peptalk.

Earthworms have burrowed for so long
that they’ve gone off the deepest end.
When fingers scratch at concrete lots,
caravans march but don’t befriend.

Point me always towards the soil
through the centuries, through the turmoil.

Lay each of the fragments on the ground
even when the grounds have been war,
and each cup has raised a tempest
and stormhands and strong handlers roar

even when the good earth’s frozen
and the bad earth’s melted and burnt;
dig me deeper, deeper, even then
when singleminded sods can’t be turned.

Push me deeper then under the sands
where the tides can’t get at the land.

Where every dream and mote is scorched
and the heat unbearably high -
no seeds can sleep, no grain’s ever tossed,
no sphinx ever moved its stony thigh.

Point me there, when there’s zilch to point
when the garden’s left without its guard,
the beds are just one lump of ruins,
each one of the orchards is charred;

where the mudtrack’s run out, like tears
along the sagging cheeks of settlements.
Point me there, when all are oblivious
to what gardens and orchards once meant.

Even when the earth’s just embers,
ash and smoke, and no-one remembers.

Point me always towards the mud
where a million ranks of marching men,
a million pairs of sturdy boots
have churned up the guts of the fallen.

If you can make out what was the heel -
place it deep where the blood and organs
have soaked into layered stone and soil,
braid the hair into the veins of veins.

Point me always to this wide earth
even when it’s narrowed down by men;
when the stench of greed fouls its old rivers,
uproots and lays waste each garden,

even when it’s slicked with guts and gore
of millions in an ancient, endless war.

Sharpen me like a pencil point
and sow my tip right into the earth;
stab me deep, plant me fathoms down
where molten metal transforms the dirt,

where primordial feuds like dragon teeth
grind in sleep, biding their time to sprout;
work me in lovingly, in so deep
that the longest scythes can’t cut me out

and the most vicious spades cannot reach.
Let my points, be they one or hundred
be mindful of the company they keep
and come to rest always in the mud.

What’s the use of sharpness otherwise
if all it’s slicing is empty skies?

Plant me when all the springs are over
and even the winters have long gone
on tiptoes one after the other
and the day’s just a seasonless dawn,

the skies are apple green and their clouds
come in nimbus wrecks and cirrus shells,
the furrows deadly straight but obscured
and the rain’s just a dreaded acid swell.

Plant me when the weather’s never there -
entire climate’s din is quiet at last
because it’s lost its bearings, unclear
if it’s present at all or it’s just past.

Sow me even then deep into the sludge
when season’s just a meaningless smudge.

Point me to the earth even when
the borders between the ground and sky
are hard to tell apart, hard to sense
the ends of low and the start of high.

You’ll know the place where your feet stand
shovel there and you’ll find my place too
down in the heart of earth, well beyond
the colourless winds and skies and seablue.

Keep me safe in the closed fists of mud,
wrap fingers of soil about my soul,
and even if you can’t, it’s enough
to touch the earth and be healed and whole.

Point me always towards the earth
not at death, from the first spasm of birth.

I don’t need the wings, I don’t need
to fly anywhere, to be close
to the orbits of stars and galaxies.
Enough that I walk in the boroughs

of milkweed and long grass, quite enough
to feel the sands scorch my bare feet,
the morning mist melt into the mud
and lift again at midday heat.

A vine, a tree, a fruit and a serpent
suffice to make this a garden
suppose it’s only the snake, I’d still want
to be here always, even then.

Don’t fret if you can’t dig much, can’t shove
me deep. Just a touch of earth is enough.

Point me always towards the earth,
place me firmly on it or below -
a Midas embrace in reverse
drawn gold from this dust, full from hollow,

morphed into something rarer, finer,
in moments and over eternities.
Lay me down and embed me firmer
into these landscaped uncertainties.

Point me always, always to this earth,
forget what edens lie beyond grasp.
Pinpricks of light in wide smears of dark -
the sky’s a void too empty to clasp,

so place me here, freezing sands or warm,
these gardens of wastelands. And I’m home.

And I'm actually home in stable wifi zone in a couple of days more, and will definitely come around then if I haven't been able to do so before. It's great being back here at WEP.....point me to WEP always..  :)