Oumou Sangaré is a multi-awarded musician and a leading exponent of the Wassoulou genre of Mali - its performers are largely women, and its lyrics address themes and subjects relevant to the lives of women in the region. Here is a song from her 2009 Grammy nominated album Seya -


Slave trade, strategies and the impact on Africa

Slavery started with civilisation some 9-10,000 years ago, all societies took slaves. Mesopotamia, Ancient Greece, Rome. Males for hard labour, females for domestic work and sex. POWs were often taken into slavery, both civilians and soldiers. Wars were frequent and brutal and provided an abundant supply.

Roman slavery was in some respects as brutal as Roman methods of military conquest. But for many Roman slaves, particularly those working in urban domestic contexts rather than toiling in the fields or mines, it was not necessarily a life sentence. They were regularly given their freedom, or they bought it with cash they had managed to save up; and if their owner was a Roman citizen, then they also gained full Roman citizenship, with almost no disadvantages as against those who were freeborn. The contrast with classical Athens is again striking: there, very few slaves were freed, and those who were certainly did not gain Athenian citizenship…, but went into a form of stateless limbo.
~ SPQR, A History of Ancient Rome, Mary Beard.

However, free slaves and those in privileged positions were few. The majority led an unspeakable life, flogged to an inch of their lives in the mines and fields. And legions of them thrown into arenas to die a most horrible death for public entertainment. In the last two centuries BCE there were several slave uprisings in Rome, ending with the most famous one led by Spartacus. That brutal treatment of mine- or chain-slaves didn’t make a comeback till the plantation slavery in the era of colonisation.

Arabs conquered ever increasing swathes of lands around the Mediterranean from the 7th century onward. The Med was a natural hub for slavery, with ancient kingdoms clustered around it and vast hinterlands with relatively less urbanised/militarised populations.

Along the South Med coastline, the Arab conquerors of North Africa become a lucrative market. Trans-Saharan trade entered a new phase characterised by a swelling demand for slaves in the Muslim cities as Islam spread outwards from Arabia.  The African Sahelian kingdoms and the North African Berbers raided their enemy settlements to supply slaves. Slave trade stripped villages of the best, the working men and women of reproductive age, leaving little scope for any economic progress. Trans-Saharan trade had sent a few million Africans into slavery. Once the Europeans came, they upped the ante big time.

Things took a turn for the worse with Portuguese arrival - they opened up another channel. Settlers arrived at Cape Verde in the 15th century, and were granted a monopoly. Cape Verde became a strategic hub situated as it is between Europe, America and West Africa. The Portuguese set up slave trading stations on the West African coastline. Cotton and indigo, produced with African slave labour in Cape Verde, were exchanged for more slaves at Guinea. And then these slaves were sold to the ships which regularly docked at Cape Verde.

It was a smooth, self-sustaining cycle and spectacularly lucrative, given the labour-intensive plantation economies in South America and the Caribbean. And of course every other European nation with trans-Atlantic interests wanted a share of the pie and soon came sniffing. The Portuguese monopoly crumbled pretty quickly. By the 18th century, the British had become the market leaders in this appalling trade. They devised a process in which no part was allowed to go waste, the diabolical triangular trade.

Made up of a three part voyage, each part was independently profitable – the ships would start from England with goods for West Africa (guns, rum, cotton, beads etc); offload these at the African slave coast, fill the ship with slaves - packed into the hold in such atrocious conditions that many would die during the Atlantic crossing; upon reaching the West Indies, they sold the slaves and stocked up on sugar/molasses, then made the return journey home, where the cargo could be made into rum again.

For four centuries, the European demand for sugar drove one of the most shocking chapters in human history, the coerced migration of millions.  The socio-economic and cultural impacts on both the origin and destination countries were mind-boggling, and the ramifications echo down to this day.

Most nations abolished slavery over the 19th and 20th centuries. However, the practice continues in many regions, including Africa. Recently, shocking footage of slave auctions has emerged - of African migrants being auctioned off in Libya. There are no words.

(I'm fully aware this is a superheavy post for the A-Z and it's not a feel-good, popular topic. But anyone writing about Africa cannot in all honesty ignore this historical event with all its overarching implications)

~ Thank you for watching! ~

Wole Soyinka (1934 -) – is a life-changing Nigerian poet, playwright, essayist, novelist, and a political activist - a towering presence in the African socio-cultural halls of fame, one of the most compelling voices from the continent. He is the first black African to be awarded the Nobel Prize for Literature in 1986, and remains the only black writer to have won it from Africa. (Hmmm…I’m not sure what that says about the Nobel!) He has written some 30 plays, 2 novels and another dozen books as collections of his other works including poetry, essays, memoirs and short fiction. He has taught at Ife, Ibadan and Lagos Universities in Nigeria and at UK, USA universities as visiting faculty. His honours are too numerous to mention here. In 2014, Soyinka revealed he was diagnosed and cured of cancer.

I read him first as a young teenager  – a couple of his poems were part of my literature syllabus, and I’ve been under his spell ever since. His use of language is rich and indelibly memorable.  He was making waves across the world with his work way before he was awarded the Nobel. About the same time as I was studying for my school certificate, an older cousin working towards a postgraduate degree in Comparative Literature in my hometown in India had his works as part of her syllabus too, I was thrilled to know that and talked about his poems with her on holiday one time. His Telephone Conversation remains an abiding favourite of mine. Read more about this inspirational personality here. 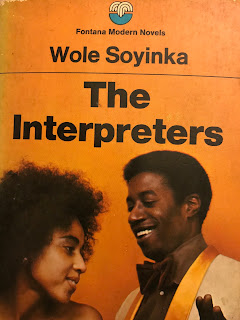 Two paddles clove the still water of the creek, and the canoe trailed behind it a silent grove, between gnarled tears of mangrove; it was dead air, and they came to a spot where an old rusted canon showed above the water. It built a faded photo of the past with rotting canoe hulks along the bank, but the link was spurious. The paddlers slowed down and held the boat against the canon. Egbo put his hand in the water and dropped his eyes down the brackish stillness, down the dark depths to its bed of mud. He looked reposed, wholly withdrawn.

‘Perhaps you’ve guessed. My parents drowned at this spot.’

~ from The Interpreters, Wole Soyinka.

Not so well-known fact : The revolutionary Nigerian musician Fela Kuti was Soyinka’s cousin.

I leave you today with this clip of Soyinka reading one of his own poems. Enjoy!