Take a listen to Life while you ponder the big issues :)  Bisa Kdei is the stage name of Ronald Kwaku Dei Appiah, he is from Ghana and has successfully collaborated with a string of African artistes, including Patoranking from Nigeria.

And have a listen to Ismael Lo as well. He's an award winning, internationally acclaimed musician actor of mixed Senegalese-Nigerian heritage.

Lineage - There is much debate in scientific circles about how modern humans originated and when. In the last three-four years the established theory is being added to and modified, based on dramatic and illuminating new fossil findings in Morocco and China and Spain. Timelines hundreds of thousand years old are being revised. As we learn to look deeper and closer and more minutely at molecular biochemistry and genetic material, our understanding of human evolution becomes more nuanced.

What is not in doubt amidst all the debate and discussions, however, is where humans evolved. The crucial role that Africa played in the story. Listen to Prof Richard Dawkins explain why we are all Africans in this short video clip:

Of the millions of years it took for humans to evolve, only a miniscule portion of the time the narrative’s played out on other continents. Africa has been the exclusive setting for the human evolution story for the largest chunk of our time on this planet. The DNA evidence confirms this, the fossil records confirm it too.

The oldest fossil of modern humans, Homo sapiens, has been found in Ethiopia, dated to around 195,000 years ago. If we broaden the ambit and look at all hominin fossils, then too the largest numbers have been discovered in Africa so far.

In 1871, long before the mysteries of DNA and genetics were known, long before substantial fossil findings even, Charles Darwin made the boldest possible scientific prediction based on the outward similarities between the African apes and modern man – that humans evolved in Africa and most fossils would be found there. Time and technology have proved him scientifically correct and stunningly astute.

The upshot, of years of DNA research, genetics, and radiometric dating –


Till about sixty years ago, the accepted theories of human evolution placed human origins in Asia or Europe. Fossil hunters had scoured those continents for years and yet only a few fossils were found there. By contrast, nearly half of all the fossils found so far are concentrated in Africa, in the Rift Valley and South Africa mostly, and this is changing every day as more and more fossils are being found. 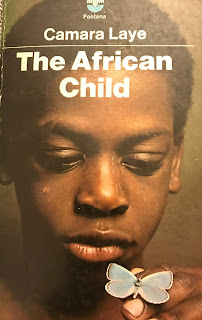 Camara Laye (1928-1980) – was a Guinean Francophone author born in Kouroussa and educated in Africa and France. His African Child is an autobiographical novel that captures the simplicity of life in an African village. It was one of the books I read as a teenager, it wasn’t a school text. I was moved by it sufficiently to acquire my own copy, and since I have the habit of scribbling the date I buy a book along with my name on the flyleaf, I can tell you now it’s been with me for more than 40 years. It’s written in a straightforward yet lyrical, evocative prose that is memorable. Even the cover is lovely. And because Fontana no longer exists, this particular copy is even more special, as all pre-loved books are.

Kojo Laing (1946-2017) –  was a Ghanaian poet, novelist and educator, born in Kumasi and educated at home initially and then in the UK. He passed away almost exactly a year ago, his first death anniversary comes up on the 20th. His writing was known for using Pidgin English and vernacular languages alongside English. He was awarded multiple times though some feel he was one of the unsung heroes of African literature during his lifetime. Read a few lines from his poem below -

Ampa I used to walk through the streets
with a black girl and a white girl
and they both looked exactly alike:
high cheekbones, slimmish, good hair, calm,
and with a fine sense of history…

Slimmish, high cheekbones, good hair, calm,
a black girl and a white girl
who both looked exactly alike,
used to walk ampa through the streets with me,
with my terrible sense of history…

Me in the high streets, my cheeks with bruised bones,
me looking exactly like my history,
slim enough to push eternity forward, calm


with Vaseline in my hair, good for all colours…

(from The Penguin Book of Modern African Poetry)