Listen here to a golden oldie classic rendered in the sublimely warm and soul stirring voice of Cesaria Evora (1947-2011) a singer from Cape Verde, an archipelago nation off the coast of West Africa. She sang in multiple languages and was awarded the Kora African Music Award twice. Read more here.


And here is the last song that Ebony Reigns, the stage name of Priscilla Opoku-Kwarteng, released before her horrific and tragic death in February. I was actually working on the post on the day the news of her death broke, quite shell-shocked! She was an awarded artiste, a household name in Ghana and only twenty years old and sang Afrobeats/Dancehall. But controversial as well for her lifestyle and subjects she sang about.

Sobering fact : Africa is the continent with the highest number of road fatalities.

Ebony is a tree of the Diospyros family native to West Africa, Sri Lanka, South India, Malaysia and Mauritius. The heartwood is pitch black, dense, durable, and when polished, capable of taking on a very high, smooth lustre without any grains showing. It is much prized.

Ebony has been used from ancient times, the oldest artefacts have been discovered in Ancient Egyptian tombs, dated to about 3000 BCE. Ebony has been traditionally used for piano keys, fingerboards and turning pegs in musical instruments, chess pieces, specialised carved and/or panelled furniture and marquetry pieces. Being hard and dense ebony is particularly suitable for intricate fretwork. The demand for ebony has been high all through, but especially so in the 16th-19th centuries. Unsustainable logging has led to some of the species, particularly in Africa, being included in the endangered lists.

Ebony is also an extremely slow growing tree, rarely growing to more than 30 feet tall and 1-2 feet in diameter at full maturity. Rarity and the growing habit makes the wood prohibitively expensive. Nowadays ebony has been replaced by plastics in many uses. It is still used for decorative or ritual carved items in many African cultures. 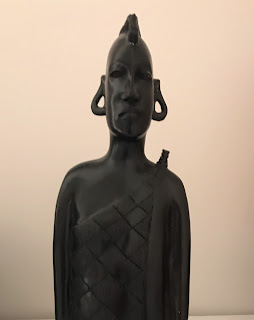 Pairs of ebony carved busts in various sizes from a few inches to a foot high were brought to my parent’s front porch for sale in the 70’s quite frequently. My mother brought them for many of our friends and relatives back in India as gifts, also some pairs for themselves. One of them is still in evidence at the parental house today, carved by unknown Nigerian artisans, I so wish now I knew where they were carved and by whom. And I have some in my rooms as well, though mine are from South Africa and Kenya respectively. 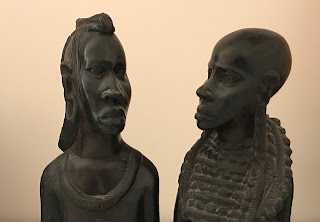 Economy - Okay so that brings us to the biggie, the big E. One is endlessly pelted with the news stories about epidemics – either it’s AIDS or it’s Ebola, and then about all these millions of people, economic migrants, queueing up and desperate to cross the Med and sneak into Europe somehow and dying in the process. Poverty and disease, and escape from them, these are what Africa seems to be all about. The total combined GDP of African countries is less than a tiny fraction of USA or Europe, that’s what gets the maximum media coverage. Africa is known to be the poorest inhabited continent.


I’m not saying that poverty and disease aren’t a serious challenge for a significant number of people – they are indeed. What can one expect? It has been systematically and ruthlessly stripped of its human resources and mineral wealth for several recent centuries. Who knows what trajectory each of the colonised countries would have today if they’d been left strictly alone? And what path Africa would have taken if slave trade had not interrupted its history?

Oh, and it makes me laugh when journalists/writers come in with whole books about how Africans were complicit in their own enslavement – ‘the chiefs were selling their people, don't you know? and then look at Japan! Korea! China! Israel! If they can recover from atomic bombs and colonisation and slavery and the Holocaust, then c’mon, why can’t the Africans get their act together?’ That's not comparing apples with oranges, it’s more like cherries with watermelons.

But put that aside. Even so, Africa is not one uniform tragedy of abject poverty and non-stop epidemics only, it is far more complex than that. There are prosperous African nations. Each African country has its own unique history that makes it what it is, and the challenges it faces as a consequence are also unique. Sometimes it’s more about unequal distribution of wealth rather than any lack of moolah. Like the world, it takes all kinds to make Africa too.

The total GDP of all African countries combined is around USD 3 trillion annually. Compare that to US or Eurozone which are both around 18-20 trillion. The top ten African economies – Nigeria, Egypt, South Africa, Algeria, Morocco, Angola, Sudan, Ethiopia, Kenya and Tanzania – together accounted for over 78% of the nominal GDP in 2016. Confirming the well-known 80-20 rule. And the disparities in the individual economic situations within the continent are huge.

Many countries in Africa have massive resources – Nigeria, Algeria, Libya, Egypt and Angola have oil/gas reserves. South Africa is a major producer of gold and diamonds, apart from other minerals. Morocco has the world’s largest reserve of phosphates. Kenya is a leading world supplier of tea and flowers. And in addition, quite a few of them are super-attractive tourist destinations.

Really, there is no justification for any part of the population of these resource-rich countries living in poverty. However, the poverty estimates for different African countries varies from 22% in Egypt to more than 70% in Zimbabwe. Misguided policies, corruption and years mired in conflicts have led to the challenge of chronic poverty in some nations. Within the more affluent countries it’s more a question of diversifying the economies to reduce dependence on one or two sectors, and ensuring the wealth trickles down evenly to all sections of the society. Despite the dire poverty figures, there are changes afoot.

Did you know that the wine suppliers are looking to Africa, cities like Nairobi and Lagos to spearhead the growth in their industry? Long term growth is predicted in many regions of Africa when the rest of the world is declining or stagnant. Infrastructure investments, wider and expanding telecommunications services, growth in the financial sector - all point towards a rapidly changing continent.

There is so much potential, the growth prospects are phenomenal here, it's a question of getting the right mix of political will and business environment. The nations to watch in the coming years – Mozambique, Kenya, Tanzania, Rwanda, Zambia, Chad, Cameroon and Ivory Coast.

And oh, Zimbabwe! and South Africa! which have both recently toppled their frankly insane presidents. Whether they will be able to turn things around and how quickly is the million-dollar question! - but definitely ones to keep a close watch on.  South Africa was the most progressive among the African nations from the 90's onward anyways, it's a question of getting their mojo back again. And Zimbabwe - well, that's a tale of the sleeping princess who's slept for forty years. Time to throw back the covers, rise and shine. It's going to be very interesting watching them over the next decade.

Cyprian Ekwensi (1921-2007) was a Nigerian author, he wrote novels and children’s books, and was lauded for his realistic and subtle depiction of Nigerian urban life and changes that shaped it. Born in Minna and educated at Ibadan and London, he had more than 24 novels published over a career spanning six decades.

I read one of his children’s stories - The Passport of Mallam Ilya sometime in the mid-70’s. But Ekwensi wasn’t any part of my school texts. So I must have picked it up from the library or from a classmate, can’t remember the details of how I got acquainted with him now. What I do remember is - it had a deliciously melancholy ending. I was a sucker for tragedy even back then.

Michael Echeruo (1937- ) - is a Nigerian academic and poet. A contemporary of Christopher Okigbo. His first collection Mortality came out in 1968. No part of my school syllabus, I read his poetry in the 21st century.  Here are a few lines from one of his poems called Melting Pot :

This bowl of a world
That rings me round and round
And will not let me marvel enough
At this dull sky
At the ignorance of these men
Who cannot know what chance can do...
~ from The Penguin Book of Modern African Poetry