The translated gist of it


This post is not really a post, at least not the usual type of post I write here, a poem or a bit of fiction, or very rarely, marking a personal milestone or mood.  I wrote a bunch of short stories in Bengali sometime back, and this post is a translated synopsis of a trilogy from there, চিঠি  (The Letter), অষ্টমঙ্গলা (The return of the bride) and সীমাহীন বিদেশ (Borderlessly Foreign), the last title gives the book its name. 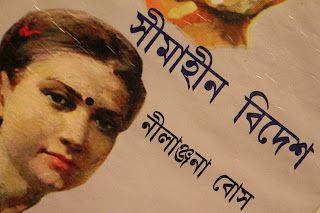 
Abin Bhaduri is a middle-aged widowed man, living in early-nineties Kolkata with his long time companion-come-helper Ramcharan, and Ramcharan’s wife, Namita.  Abin has lost his wife Bharati maybe ten years ago or so when the story opens.   But he refuses to move on from the past, he keeps Bharati’s letters to him eerily all around the house where she had placed them as she had prepared for death.  Namita and Ramcharan both stick to doing their jobs in the household exactly as Bharati used to demand.  No changes are permitted anywhere by all three of them.


Abin dearly loves his step-daughter Chhuti (a Bengali word with dual meanings - “holiday” or the verb form of “I run”). But he is diffident about his claim on her, particularly as she has never stopped “ running”  after her mother’s death, first to study, and then on a series of quick job changes.  She currently works abroad, somewhere in the gulf countries.  Abin is torn between his diffidence and worry, and his dead wife’s written entreaty to take care of this “motherless” daughter.    By the end of the first story, Abin receives a letter from Chhuti in which she tells him of her plans to marry Tareq, an Arab colleague, and to convert to Islam as her marriage won’t be recognised otherwise in Tareq’s family/community/state.  He reads it and wonders if Bharati will accept that he has discharged his responsibilities adequately.


The return of the bride


The second story opens with Abin, Ramcharan and Namita planning for the return of Chhuti and Tareq eight months after the wedding.  Abin is worried about the cultural differences.  Tareq very easily overcomes the divide and wins over Abin completely by allocating the older man the place due to a father-in-law as a matter of course.  By doing so, Tareq symbolically “gives away” Chhuti as a daughter to Abin in a reversal of roles.  Abin also finds out that Chhuti has been “running” not to avoid him, but to escape what she calls her mother’s complete and pre-planned hold on all inmates of the house even after death.  He is shocked at her antipathy towards Bharati, her own blood denying her love, but is also simultaneously delighted at the revelation of Chhuti’s affection for him.  He realises that love has nothing to do with blood ties.


Abin keeps refusing Chhuti’s invitation to visit her home, so Tareq lands up without notice and whisks Abin back with him without a chance of refusal.  Abin goes abroad for the first time, very anxious at the prospect of being away.  He takes a couple of Bharati’s letters along to sustain him.  Once there, he comes close to striking up a friendship of sorts with a Bengali widow and then withdraws into his shell when he discovers that she is not from India.  He is about to make a dismissive remark  about her being from a different religion and a foreigner to Chhuti, when it dawns on him that his favourite two people are now both from a different faith, and one of them is also a foreigner.   Everything beyond the borders of our own comfort zones can be dismissed as foreign; labels are easily stuck but their meanings are hard to find.

If you read Bengali, or are one, and want to check out the book, then do feel free to message me - nilabose306bATgmailDOTcom for details.
Posted by Nilanjana Bose at 22:30