Guess my Guest? Talk about Gothic Tales. And Tuscan Moons.

Guess who I am saying 'namaste' to today right here? Denise Covey! Who co-hosts Write...Edit...Publish  and needs no introduction. I've known her for many, many Moons, since the infancy of my blogging days. A blogger, teacher, and author whose varied works I admire and enjoy hugely, Denise straddles across several genres, contemporary romance and paranormal, travel writing and self-help and chick-lit. Today she is talking about Gothic novels and the making of her paranormal romance, Under the Tuscan Moon.  All yours, Denise, take it away -

I love writing contemporary romance, but I also like to dabble in the paranormal. If  you're not familiar with paranormal romance, it’s a combination of romantic fiction and speculative fiction. Paranormal romance’s focus is on romantic love, but it includes elements beyond the range of scientific explanation. It blends together themes from the speculative fiction genres of fantasy, science fiction and horror.

In my first paranormal novella, Under the Tuscan Moon, I have combined these elements with a heavy dose of the Gothic I so love.

Now, what is a Gothic Novel? According to one definition, it is an English genre of fiction popular in the early 18th to early 19th centuries, but some go back further than that. It is characterized by an atmosphere of mystery and horror and has a pseudo-medieval setting. Popular favourites of mine are Dracula, by Bram Stoker, Frankenstein, by Mary Shelly, Wuthering Heights, by Emily Bronte and Jane Eyre, by Charlotte Bronte. The honour of being the first Gothic novel goes to Horace Walpole's The Castle of Otranto (1765) which I read recently and thoroughly enjoyed.

ITALY AND THE GOTHIC NOVEL

Without Italy, the development of the Gothic Novel would have been very different. More than France, Spain or Germany, Italy was the Gothic writers' favourite geographical and historical background. Italian characters and settings were used so extensively that the genre often came to be almost entirely associated with Italy. Writers viewed 'Gothic Italy' as a nest of enormous narrative potentialities: Italy had violence and passion, it was ruled by a feudal and despotic nobility and was under the influence of a degenerate Catholic clergy. Italy’s landscapes were dotted with castles, churches and ruins whose labyrinthine and claustrophobic architecture was the novels' perfect physical and psychological setting.
When writing Under the Tuscan Moon, I drew on the rich Gothic atmosphere of the ancient tales and worked hard to recreate the medieval setting in language, supernatural belief and characters. Tuscany was an easy choice of setting for me, having travelled extensively through its beautiful landscapes, and admired the medieval castles (castellos) and extensive vineyards. I well know that glorious Tuscan moon under which my vampire action takes place. Those howling wolves and rustling pigs in the forest were a rich source for this author’s imagination.
My novella is set in a Tuscan forest in the late 16th century, against a backdrop of treed mountains, gentle vineyards and howling werewolves.

THE MYSTIC MOON hovered in the inky sky, inviting the stars to dance. Ethereal light spread over the gentle Tuscan hills, illuminating the path for two cloud-shadows. Hand in hand ran Sibon and Ciassia, two small smudges on the landscape. On feet made swift by love, they entered the leafy forest where the trees were so marvelously tall, all light was extinguished.

The traditional view of Italy was its very rich reservoir of themes and characters. Gothic novelists strengthened the stereotype of Italy as a violent and backward reality by creating and exploiting what would soon become the typical Gothic paraphernalia—ruined castles, ghosts, dark forests, sentimental heroines, wicked villains and the dramatic landscapes of the Alps and the Appenines.

I exploited some of these paraphernalia, using the landscape as character, where the action in the story cannot easily be separated from the setting.

The moon bounced along the grass, an opiate vapour breathed from her golden rim, her essence dripping softy from the mountains. Light spread languidly into the Verdant Valley as the humans stepped from the shadows into open sight, a superior male, by his side a female of breathtaking beauty.
Vipunin, who considered himself the most arresting representation of the masculine form on this earth and the before-and-after world, was enraged to see the male’s handsome visage. He clamped his teeth, his jaw fixed in a scowl. This human was his mirror image, with his thick black curling hair falling to his shoulders, his sharp features denoting pride and strength.
It was the vampires’ prerogative to take on the likeness of a human, the reverse was not acceptable.
This male pretender will die tonight.

Yet, the use of Italian topics made by Gothic writers went well beyond the set of conventions and tropes which soon became commonly associated with Gothic novels and, generally, to the popular perception of Italy. There is the aura of strangeness and mystery associated with Italy that novelists exploited with its subtle aesthetic and ideological implications. Italy effectively was a complex narrative, in which writers often played out a cultural agenda in which moral, aesthetic and political standards were often subverted.
Italy took centre stage, and, more than any other geographical or historical setting, was the basis for the plots and themes of most of the main classic Gothic works. Horace Walpole's The Castle of Otranto (1765), traditionally identified as the first work of the genre, was based around the southern Italian city of the same name, even though he only chose the name because it had a fascinating sound. His short novel featured all those elements associated with Italy which would soon become part of the Gothic machinery: a tale which was told in a medieval manuscript, with dark and labyrinthine castles, mysterious prophecies, and a corrupt and violent aristocracy. He knew Italy very well as he had famously visited it together with Thomas Gray in 1739-41, and the moral and aesthetic background of the novel derived from his own Italian experiences.
Myself, I have travelled extensively in Italy, have explored its medieval hill towns where if you walk around in the darkness of night you can imagine the ghosts of the past calling.
Thanks so much for giving me this opportunity to talk about the Gothic Novel, Nilanjana! You’re the best! Readers, I hope you enjoyed the glimpses into my paranormal romance. If you check it out on Amazon, you can read the first chapter or so for free.

Under the Tuscan Moon 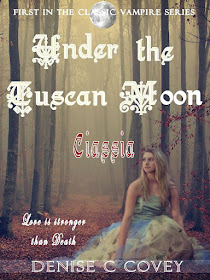 Within the velvety Tuscan sky, a harvest moon glows like liquid amber. Mysterious shadows seep noxiously through the unsuspecting forest, preying on the vulnerable, whose blinded gaze mocks their senses.
A man.
A woman.
Forever locked in a sensual embrace.
A werewolf howls…
A cloak swishes…
And,
Alabaster flesh waits to be torn.
Timing is everything in the Danse Macabre.
On this night the nectar of revenge is at its sweetest.
Just ask Vipunin…
“Who is Vipunin?” you ask.
A tormented soul, longing to recapture the life stolen from him a century ago. His wait is finally over. His love, Ciassia, has returned and she will be by his side for eternity…
Or so he thinks…

"Book One, Ciassia…the first in a collection of exquisitely-written Gothic paranormal romances.

Welcome all to this intriguing tale. I had the great pleasure of reading this amazing story. The lush details and mystery captivates the reader. If you love beautiful writing and intrigue, you will truly enjoy this story."

"What’s not to like about two Vampires whose voyeuristic bent lends great sense of time and place, whilst their intended victims unknowingly engage in sensual embraces? Eternal life in the dark world is forever the moment of transition from light to darkness, an ageless and inescapable fact of a Vampire’s existence, in which the past is often a haunting and taunting memory. Such is Vipunin’s fate when the present transcends time and presents a dilemma in which he discovers even a Vampire can be struck with a conscience of right over wrong, and all despite dire need to quench his bloodlust. But will his Vampire companion, Cuchulain, challenge Vipunin in the face of outright betrayal? This is a tense, engrossing, and chilling read. Enjoy!"

Vipunin and Cuchulain are bloodthirsty vampires on the hunt in Under The Tuscan Moon, when they come upon Sibon and Ciassia, newlyweds enjoying the moonlight and each other. The setting is ethereal, the moon mystic and the introduction to all the characters filled with drama and thrills as Sibon fights two powerful vampires for his love, Ciassia.But it's Ciassia that holds the key. Written with genuine vampire mythology in mind I loved not only the setting, Tuscany, which was beautifully portrayed but the descriptive scrumptiousness of the offerings whether, human, blood or cheese and wine. 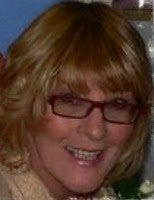 Denise Covey hails from that land Down Under, where she publishes flash fiction, short stories and travelogues in Australian magazines. When not writing, she teaches English Lit to her rapt senior students who think it’s way cool to have a writer as a teacher. Under the Tuscan Moon is her first, but not last, paranormal romance. Denise has decided it’s way cool to live in a world of vampires, angels, demons and werewolves.

Thank you Denise, for that entertaining and informative post on Gothic novels. For my part, I greatly enjoyed reading Under the Tuscan Moon, and am looking forward to the next in the series.