Write...Edit...Publish : and a pair of empty shoes 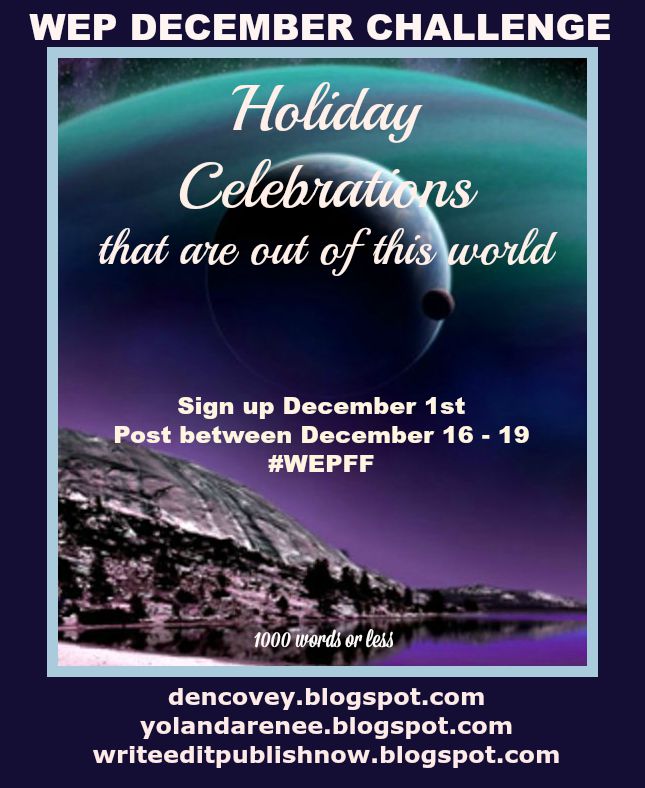 Okay, so this is one of the last posts for the year 2015, which seems to have zoomed past faster than I could say Write…Edit…Publish, but it’s also a first.  And not in a good way.  I am travelling and cannot participate in one of my  favourite blogfests.  The first time that I am a no-show at WEP – just gutted! This post is a bloggish version of a pair of empty shoes, you know, like that march in Paris recently before the climate conference. I can't be here, but hey, here I am, right over here at WEP!

This month it's all about Holiday Celebrations Out of This World, writing up Sci-Fi flashes are some of the coolest bloggers, among them Denise and Yolanda.  Go visit them and check out the entries, and jump in with your own if you like. Judging the writing contest will be the Ninja Captain of the blogosphere, Alex J Cavanaugh, the Sci-Fi maestro and best-selling author of the Cassa series.


My posts for WEP have usually been flash or poetry, all entirely imaginary. This time, to mark my absence, I am scheduling a different post, factual, no-nonsense non-fiction  - the empty shoes of my imagination alongside the WEP-ers.

Celebrations Earthly and unEarthly; and the six honest serving men on the subject

Traditionally, holidays were just that – holy days, community based religious or social events, rooted at a particular place, even to specific features like rivers or beaches.   Libations in the Ganges, for example, form a major part of some Indian ones, going sailing on the Nile is part of the Egyptian Sham-el-Nessim, bar-be-ques on the beach, I am told, is a Christmas tradition in Australia.

So. How to slip them off Earth and seamlessly into a different planet? Should the observances be tied to the time zone of the origins or the one where the celebrations are?  What happens if the merry-makers are transiting through several time zones during the day?  Most festivals stem from the practices of ancient agrarian societies, harvest or sowing, seasonal cusps, burial or other death rituals, ancestor worship. How to carry these over to places with entirely different references for time? Celebrate a festival based on the lunar calendar on Jupiter say, which has not one but 63 moons? Mind-boggling or what?

Where off Earth are earthly festivals celebrated?

But living on Jupiter is not something we must grapple with right this minute. As of now, the only home humanity has apart from Earth, is the International Space Station (ISS).  And that is where our festivals are celebrated off-planet, albeit with some nifty footwork to overcome the problems of co-ordinates.

The ISS hurtles through space at roughly 5 miles a second orbiting the earth, spinning furiously on its own axis every 45 minutes.  This moving and shaking means the ISS experiences several sunrises or sunsets in 24 hours.   Day and night are very different in space - it’s a timekeeper’s nightmare out there! So when exactly is it Thanksgiving or Christmas out in space?  This is resolved by locking the ISS to Co-ordinated Universal Time (UTC) which is matched to GMT. Thus any celebration/festival happens on the ISS at the same time as it happens on Earth.

Right, time issues sorted, but then there are plenty others to fix.  The space station is international, there are several countries which send people up there, and not everyone celebrates the same festivals.  Another minefield to negotiate!  But Christmas is more or less a constant on the holiday calendar for the American crew members.  To avoid any confusion, the astronauts are permitted 8 holidays, which must be chosen well before their mission. Spontaneity is simply not an option up in space.

Not just the delivery of the traditional roast turkey has to be done months in advance, but also the food has a tendency to float up, up and away from trays. Zero-gravity makes no concessions for Christmas, it’s never on holiday. Solution? Velcro!  A strip of that ubiquitous earthly fastening keeps the food and cutlery in their places.

However, from what I hear, the food isn’t a patch on what is normally consumed. Space food can’t match home cooking back on Earth. They might get the traditional items but much of it is dehydrated and has to be reconstituted before it can be eaten.  Take a shufti at these astronauts celebrating Thanksgiving:

The greatest bummer? No liquor! The ISS doesn’t permit a bar.  Apparently the plumbing on the station can’t cope with alcohol.  So to go with the turkey, there’s only plain water, which is purified from the astronauts’ own, ahem, bodily fluids.  Yikes! Give me a regular roast and a glass of wine any day.

How long’s this party been going on anyways?

The earliest recorded Christmas goes back to 336 A.D, partly because birthdays of even saints were not given much importance those days.  Majorly because the early Christians were persecuted and hounded for their faith.  Christianity only became widely accepted after Roman Emperor Constantine declared it as the state religion in the 4th century.  So the guesstimate is that Christmas has been celebrated on Earth for almost 1700 years, pretty long time!

And off Earth?  That’s easier to pinpoint.  During the Apollo Mission 8 in 1968, the astronauts marked Christmas from the lunar orbit, by reading extempore from the Bible, which was broadcast live here on Earth.  Most people found it powerful and moving, but an atheist took NASA to court for including religion in a government programme.  The court ruled that the government had no jurisdiction over something that happened in lunar orbit and threw the case out!

The ISS has been continuously manned from 2000 onward, so there have been crew members up in space celebrating Christmas for 15 years. It has three permanent crew at all times.   The US space shuttle can take up another 7, the Russian ship sends up 2 cosmonauts at a time.  So theoretically a max of 10 people.  Not much of a party at the best of times, three or more than three, still definitely company up there.

As of now, there are 6 people up in the ISS. I don’t think any of them is coming home for Christmas. It’s strange, isn’t it? Millions of us travel back to be with our families to celebrate our individual festivals; the people who can’t - the defence forces, the emergency services, the overseas workers, the optionless minority for whatever reason, we commiserate with them.   I wonder how many of us remember the space-going folks at this time? The more I think of them, the isolation and endurance and motivation, the more I am amazed at their sheer monumental grit.

The astronauts insist that it’s special, calling family from space; to see the earth hanging like a sparkly blue bauble in a black sky.  It probably is.  I mean, if you have to be away on a special day, then the ISS is probably as cool as it gets.  But I’d rather be here on this planet with the family, digging into a thoroughly un-reconstituted bird without having to resort to Velcro, know what I mean?

Signing off now, with my feet planted firmly on Earth, and armfuls of good wishes to you all for a happy, peaceful and uberscrumptious holiday season and an equally fun 2016!