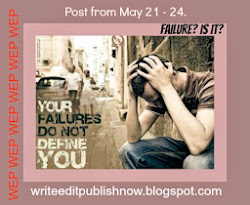 This Write...Edit...Publish... prompt.  And my WISM. (That's Work-in-Stalled-Mode in case you were wondering).  Totally made for each other. It started as a 1000 word flash and somehow grew to a novella and spilled all over the place because I had no idea what I was doing, which is how most of my writing gets done anyway.  The basic structure is more or less in place, but it needs a huge amount of rewriting. Especially it needs tense correction from the present, which is fine for a flash but completely insane for anything longer.  I have been putting it off forever, such a daunting prospect!

An excerpt with the tense redone and hopefully crisper and neater.

Abeer pulled up the withered stalks violently from the planter.   Late Friday afternoon in spring, the terrace was bathed in a diffused light preparing for sunset.  His terrace had sunlight the whole day, the summer months were pitiless here on the top floor.  So he just could not understand this, why none of the seeds he planted grew for him, why they shot out an eager tendril and then sighed and died.  He looked at the earth clinging to the dried up roots, and shook it back into the planter.  A little residue remained on his hands, black and almost sticky.  The most famously fertile soil on the planet, earth that had supported growth for millennia, yet he could not make anything bloom on it.  He shredded the bunch with unnecessary violence, and they crumbled into bits the same colour as the desert.

A few things had changed over the years, he had changed too, much to his own consternation.  Catch him trying to grow sunflowers and moonflowers and hibiscus in containers!  His need had always been for dead stuff, voices trapped in dead machines and played back with their bass and tonal qualities immaculately preserved.  Dead words traced onto dead, pulped and pressed trees, rather than ones shouted and sung live around his home.  Beautiful eyes painted on canvas, their fixed gaze over his life and its sterile neatness, accepting, uncritical.

That was why it did not work out with Meenakshi.  He could not bear those living eyes like moonlit waters with unfathomed depths, following him, smiling at him.  She had wanted the clutter of kids too, he shuddered at the thought.  He had desired companionship, not to dandle babies on his knees.  And he had been careful, but the one time the precautions did not work, he had been adamant.  So what if it could not be done here? it was perfectly legal elsewhere, he had arranged the details.  Her eyes grew a strange patina to them afterwards, crystallised reproach and longing, smeared on the irises without clouding their beauty.  Even more intolerable.

No, he did not allow himself any regret for the ending.  It was neatly done, no messy emotions, no wrangling, no dramatics.  Later, he had heard vaguely that she had remarried. He had never felt any urge to marry again, bring a different pair of reproachful eyes into his life.  The job, this home high above the noise of the city, over the thread of the river; his books and music and occasional forays into the countryside;  sometimes a raucous get-together at the Buddha bar with friends, each event and each action pinned on his life as a deliberate shining badge of normality.  More than enough.

He really had not noticed when it had stopped being enough.  When exactly did this hankering to have other living things around the place start?  It came on gradually like a silent disease.  He had toyed with the idea of a puppy, and then quickly abandoned the thought.  It would be alone here the whole day and slobber at him as soon as he got home, walks and bones and barking, never a minute’s peace.  In the end, he had got some fish, the cold eyes, the iridescent colours, the swirl of water and ornamental foliage fitted right in, into his cool steel grey-blue sitting room and his cool steely blue life.

He had delighted in their exoticness initially.  Then one day looking up suddenly from reading, he found a single eye fixed on him, and somehow all that had once followed him around was there again, magnified and unblinking.  Meenakshi, meen-akshi, fish eyes, eyes shaped like fish, eyes like moonlit waters, eternal longing and reproach in their unfathomed depths.  He had quickly burrowed back into his book; and soon afterwards packed off the lot to Sameer’s son.

Back home on holiday he heard about Meenakshi’s family, she had children now, he had chanced upon her snaps accidentally through a common friend, and her eyes were still the most achingly beautiful eyes, flanked now by enormous baby pairs.  The turmoil had washed out of the mother’s, they had looked radiant and restful.  He had looked at his own face and his eyes just looked emptily back at him, surrounded by folds of flesh.  No pointers anywhere in them of any emotion whatsoever.  Dead eyes, sunken, mottled flesh, sagging slowly towards final oblivion.

He came back and saw the gulmohurs and cassias bloom in their season along the river bank, cover pavements with their fallen petals.  In the far distance, the island fields turned brilliant green with the sown crops milling and swaying in a strangely restless peace.  He looked far out to the blurry butterscotch coloured horizon of the desert plateau, and the pyramids standing out crisp against the setting sun.  A fierce longing had possessed him suddenly, to have that movement replicated here at home, the movement of green stalks responding to warmth and water and winds.

He had got seeds and planted them.  They sent up shoots an inch long and then drooped and withered.  He had got others, and kept them shaded, kept them in the sun, watered them frequently and held back on the water, but there was no change in the outcomes, all sprouted and then died.  The more they had died after that joyous green spurt, the more all-consuming his obsession had become.

He dusted off his hands and looked out over the shimmering strand of the river in the fast failing light.   One seed, just one that had taken hold and he had not let it grow, yanked it out without thinking about it twice.  Now nothing would grow for him in some weird cosmic revenge? The sunset azaan was sung from the mosques; the strains wavered across to him in a choral performance of devout voices, raised as though in a great despairing lament on his behalf.  The moon rose above the city, over heaped clouds in the east, and stained everything unequivocal silver.  His eyes glistened as he watched the river change colour and morph into moonlit waters.


Read more about Write...Edit...Publish hosted by Denise Covey, and the other entries here.