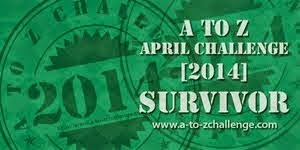 Every dawn draws a new poem

every day sings a new tune

sometimes as deep as an ocean

at others as high as..... whut..? it’s over? Oh okay, this is the A-Z survivor post I am doing, whew!  no more rhymes marching in their little stiff uniforms...free-e-e at last, free at last...That’s actually so not true. Weirdly.

I am pleased of course that I made it through, no question about that. And I am glad also that I can write what I pretty well feel like now, theme and forms and rhymes can be luxuriously given the boot. But that does not feel very important right now. What is rippling under the surface of my brain unobtrusively is something completely different: that I might have learnt rather more than I thought I would, in directions other than I had expected and/or thought possible. Story of my life, boss!


But first off a shout out to Arlee Bird of Tossing it Out, the creator of the A–Z Challenge, and to the co-hosts and their teams who visited, commented and shared the entries and kept the morale high. Special thanks to Alex J Cavanaugh, M.J.Joachim, Madeline Mora-Summonte and last but not the least co-host Damayanti in that context.

A vote of thanks and appreciation to all my fellow bloggers and friends who supported me through out the challenge.  The top commenter awards have to go to Sabeeha Parack of Midnight Scribbles and Yolanda Renee of Murderous Musings and Defending the Pen, and Denise Covey. All these ladies have given unstintingly of their time and opinions here on this blog throughout the month, Yolanda in spite of her own participation in the challenge, and a far more serious health challenge, as well as editing schedules of her novel, kudos. Thank you all!

This is the stuff that happened here in April:

That's it, my first A-Z is done, 26 days, 26 forms and 26 poems all in fair working order, barring a few broken rules and feet here and there. I do think I have managed to polish my writing up one notch. Not to be overly smug as a bug in a rug or anything, but distinctly chuffed.  With due apologies to PGW for distorting his line, of course.