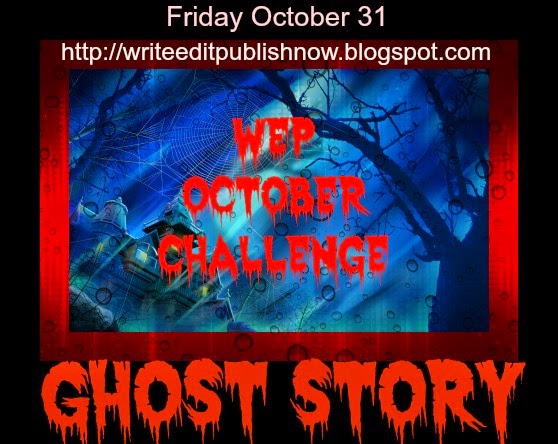 Wow! where did that October go? The start of autumn is always a happy-busy time - all our main festivals are lined up one after another, beginning with the Navaratri and ending with Diwali.  Incidentally, there is a Halloweenesque festival tucked in that month of Indian fiesta too, the day before Diwali fourteen lamps are placed around the house as a mark of respect for "unsatisfied spirits".

So glad to sit down for some quiet and get back to Write...Edit...Publish, the monthly bloghop hosted by Denise Covey, wish you good health and happiness and happy writing always, Denise! The prompt for this month is a ghost story.

Just want to mention here that a mushaira is a gathering of poets to recite their poetry, sometimes in competition, rather like a musical/poetic duel. A literary face off.  It is an Arab-Persian tradition that came to India centuries ago and survives in many parts of India and Pakistan. But Ruphail and its fair are completely fictional, of course.

For most of the year, Ruphail was a village that lived in happy anonymity, minding its wheat-fields and corn-, its livestock and tractors, its library, station and a single school.  But every autumn, it was transformed by the biggest, grandest month-long fair, from the first night of the Navaratri to Diwali.

The highlight of the fair was its annual Mushaira, where shayyers and qawwals from far-flung villages vied against each other.  For all its insignificance, Ruphail had consistently produced the champion -  Saif-ud-din Akhtar had held the trophy for several years now.  This year too, it was understood that he would walk away with it.

“What are you doing poking people awake at the crack of dawn? What’s happened?”

“Saifu’s been bitten by a krait.  He’s in the city hospital.”

“Will he be able to come back and compete in the Mushaira?”

“Pray that he comes back, Pratap.”

“Less than a week left for it.”

Pratap was practicing his routine for the fair – he was an amateur mimic and ventriloquist - when Bhule came in with Saif-ud-din’s notebooks.

“The idea is that you will take the place of Saifu.”

“What are you, crazy?  Everyone knows Saifu, they will make out instantly!”

“Well, actually they won’t, the judges and the other competitor-poets are all from outside, they might have seen him last year, not likely they’d remember every detail.  But that wasn’t what I had in mind.  You go as yourself, only recite his poetry there, that way Ruphail still has a chance at the trophy. Simple.”

“But that’s kind of cheating.”

“I suppose.  But no other way to the trophy.”

“And it’s very dicey indeed.  I won’t be able to respond properly to the cues.”

“Just learn the stuff by heart, whatever fresh material he’s written after the last Mushaira. Poetry’s all the same you know, moth-and-flame, wounded-hearts, blushing-rose, wine-and-Saki, same wine and same bottles, always the same blah.  Anything can be a cue, anything can be a response, and poetic licence is always there as a last resort.  Piece of cake, really.”

“I have a very bad feeling about this.  It’ll probably go horribly wrong.”

“Nothing ventured, nothing gained.”

Bhule looked troubled, the scheme blurred and the focus moved back to the real reason for it, lying miles away.

“He’s still critical. But stable.  Whatever that means.”

Pratap finished his routine early and moved to the other marquee alone. Though Bhule was supposed to meet him, he had not turned up.  Pratap made his uneasy way to where contestants were queuing for the competition. There were around ten people in front, a woman in a green sari; a suavely dressed middle aged man, too slick by half; a man wrapped up in a great khaki blanket-like shawl three places ahead of him.  He fidgeted nervously as the queue shortened.

Pratap looked up electrified, it was the man wrapped in the shawl, his profile visible past the edge of the cloth on his shoulder and head.  He wanted to call out, but checked himself just in time.  It would be difficult to explain what he was doing in the poets’ queue.  So Saif-ud-din was back! Just in the nick of time too!

Relieved, Pratap smartly moved out of the queue and into the spectators’ area, keeping an eye out for Bhule.  He would give him a piece of his mind when that worthless so-and-so came in.  Imagine not letting him know that Saifu was back! Suppose Pratap had been in front of the queue rather than three places behind? He sat among the audience and tried to compose himself.

Meanwhile, the draw of lots was over, and the mushaira started.  Someone was reciting the opening quatrain of the competition.

“Where will you go, beloved, without me?
I’m the goblet, the wine too, and the Saki;
in your quietest taverns, I am the peace,
I am your passion and your poetry.”

Before the applause had fully died away, Saif-ud-din answered:

No, I’ve come too far, can’t feel the spell of your smile
open like a music box and reveal inside
the dancers, fuzzy-white, magical, fragile,
twirling against my heart, on that final divide

between melodies of dreams and reality.
A minute’s restlessness, a door ajar, the rise
of a road in early moonlight, a silvery
trembling, a shadow-chase somewhere has meant this price.

Pratap joined in the chorus of “wah-wah” and clapping, he could not remember reading those lines in the notebooks.  The exchange of couplets and quatrains became brisker, the words flashed like jewelled daggers, back and forth.  Pratap forgot that he was keeping a lookout for Bhule, forgot his relief at his split second escape from Bhule’s hare-brained scheme, just sat entranced.  Saif-ud-din outdid all his previous performances as the evening deepened into night.  The trophy, this year fashioned like a silver inkpot and quill, was awarded again to the defending champion.

“Where the hell have you been?  Why didn’t you turn up at the Mushaira?”

“You should have come.  Saifu was in top form. He got the trophy, decisively too.”

“What are you talking about, Pratap?! Saifu died last evening at the hospital.”

Pratap looked dumbfounded.  He finally said when he found his voice again, “But it wasn’t just me, the whole audience saw him, heard him winning that trophy.”

Saif-ud-din’s body had been readied for the burial procession.  There were people coming and going, his mother and sister were receiving condolers on one side, the men huddled at the other end.  Bhule and Pratap sat with them for some time, then slipped away inside to the room Saif-ud-din had shared with his brothers and cousin.  Pratap lowered his notebooks onto his rickety desk. On a shelf above it, stood a brand new shining trophy in the shape of an inkpot and quill.

*Naam, janab? - Name, Sir?
shayyer - poet
qawwal - singers of qawwali, a particular form of Sufi devotional song. The form is also used in competitions and/or a point-counterpoint format.
Saki - literally the one who pours the wine. Usually the Saki is a metaphor for the beloved, either an earthly one, or God.

FLASH FICTION, POETRY, NON-FICTION, ARTWORK, PHOTO ESSAY
JOIN IN THE FUN! SPREAD THE WORD!!
PLEASE LEAVE A COMMENT WHEN LINKING UP.
Email Denise if you have more questions:
den.covey@gmail.com