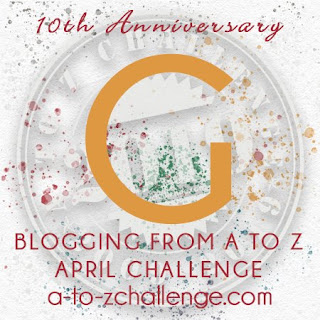 Take a listen to Goshai Gang with a track called Maya (Illusion) and then a softer number from the Grooverz.

And now for a throwback to a different, more traditional number, rendered by a well known singer called Poulomi Ganguly - Ami Banglae Gaan Gai (I sing songs in Bengali) lyrics and composition by Pratul Mukhopadhyay.

Geeti is a Bengali suffix used to denote the canon of a lyricist/composer, as in Nazrul-Geeti, meaning songs of Kazi Nazrul Islam. Here I must mention that I have deliberately restricted the tracks for this A-Z to a select few, mostly the rock bands, because otherwise the entire array of music spirals wholly out of control. If I start bringing in individual lyricists, singers, composers…Rabindranath Tagore, Kazi Nazrul Islam, Rajanikanta Sen, Atulprasad Sen, Dwijendralal Roy, Salil Chowdhury and a hundred others among the lyricists/composers, Shreya Ghosal, Rezwana Chowdhury, Suchitra Mitra, Debabrata Biswas, Hemanta Mukherjee… - the names of the singers are legion obviously. Nazrul alone wrote and composed 4000 songs, Tagore over 2000, Salil Chowdhury probably over a thousand…that’s just three of the musical Giants…Then there’s the folk music, where many of the composers and lyricists are lost in the mists of history.  There’s the whole category of film music, sheesh, I’m not even going there. We could probably do ten years of A-Z just on this one topic. So most of the tracks presented here are from the 90’s onwards and the choice is highly subjective and narrow – for the Bengalis who may be reading these posts and gnashing their teeth at the lack of representation of the other genres - sorry, I'm fully aware of the limitations but nothing I can do, folks!

The average middle-class Bengali is a serious foodie. If I’m being dispassionate, I have to say he is also a strange mass of refined and earthy.

For instance, he eschews the use of utensils to transport food into the piehole - uses his hands instead. But then he also follows a strange etiquette whereby the morsel must be handled only with the fingertips all the way from plate to mouth, the palm must never be sullied. Bengalis will go to the greatest lengths to get the freshest, most delicate of fish. But then they will also make the humble peels of vegetables into a dish. They will eat fish head, flowers from the pumpkin vine, shoots and leaves, use crushed poppyseed paste as a base for curries, sprinkle a characteristic combo of five spices (paNch phoron) to flavour their gravies. They’ll wrap fish pieces in banana leaves or plonk them into a green coconut for steaming - take uncommon amounts of trouble with food.

A complete Bengali meal starts with bitter vegetables and greens, followed by lentils with a fried item, then the vegetable courses, followed by the main dish of fish and/or meat, then a tart-sweet chutney with papad and finally a couple or more of desserts. Except the chutney and the dessert, all are served with steamed rice for a regular meal, or pulao (spiced rice, sometimes with cooked vegetables/cottage cheese/meat/fish).  Flour is used to make luchi and parota, the dough kneaded with a shortening of ghee and rolled out flat, then deep- and shallow-fried respectively. Courses must be eaten in a fixed sequential order, as I’ve mentioned before. A proper Bengali meal must cover the entire gamut of chorbyo-choshyo-lehyo-peyo – nourishment that must be chewed, sucked, licked, and drunk. Just being ‘edible’ is not enough for Bengalis.

The cuisine is probably the most elaborate in the subcontinent both in terms of the range of ingredients used and their preparation. It is different from its northern and southern counterparts in that there is no obligation towards vegetarianism for Bengali Hindus (except the widows, who’re treated abysmally, but that’s another story). While most of India uses knives and cleavers to prepare vegetables, Bengali kitchens have a special implement – the bonti, used while sitting on the floor. Traditionally, Bengali meals were eaten seated on the floor, on individual square rugs/carpets called ashon (meaning seat), on bell-metal plates or banana leaves. Prior to mid-seventies all meals were served this way in my grandparental house in Kolkata.

There is evidence of rice cultivation in the Delta region from prehistoric times. It is also crisscrossed by innumerable rivers. Therefore, rice and fish have naturally evolved to be the Bengali staples.

Rice grains in some form are offered up to deities and dead ancestors, in weddings, in coming of age rituals, in the last rites. Idiomatic Bengali is dominated by rice – koto dhaane koto chaal (how much paddy gives how many husked grains) annabhaab, annachinta (lit ricescarcity, riceworry). What the Inuit do with ice, likewise the Bengalis with rice.

The most ancient literature of Bengal mentions rice, vegetables, milk, butter, ghee and yoghurt, and fish, of course. No lentils or wheat products, no cottage cheese, no chilis or potatoes.  These were introduced by outsiders – by the Islamic ascetics who came to Bengal in the 11th century, by the Mughal governors who came to rule in the Emperors’ stead and brought in an entire cuisine with them, and by the Portuguese and British colonisers.  Bengal has been a melting pot and Bengali cuisine has evolved to reflect just that.

However, the diet and habits of Bengali Hindus and Muslims remained exclusive to their own communities till a century ago. From the 13th century onward Bengal was ruled by successive Muslim rulers. The Hindus maintained strict taboos to differentiate and preserve their cultural and religious identity. The Bengali Hindus were an elite, economically and educationally privileged minority in undivided Bengal by the early 20th century. Bengali Hindus ate fish and goat and a range of game like turtle and deer. There was a strong tradition of animal sacrifice in the Shaivite segment of the Bengali population, and unlike the Islamic tradition, animal sacrifice required decapitation at a single stroke. The eating of beef was taboo among the Hindus. They eschewed onions, garlic and chicken as well, as these were used by Muslims.  Food cooked by a person of a lower caste or of a different faith was not permissible for higher caste Hindus.

Muslims on the other hand did not consume pork, slaughtered animals as per the halal Islamic practices, salted their rice while cooking pulaos and used yoghurt to make a non-alcoholic drink. Both communities followed mutually exclusive practices, culinary segregation and coexisted mostly amicably. Muslim practices and customs were gradually adopted where they did not contravene the taboos – for example Bengali Hindus used asafoetida, a plant resin used as spice, first brought in by Muslims. More than 70 years after the Partition made West Bengal a Hindu majority province of India, there is no legal prohibition on the consumption or sale of beef in the state, one of the few states in India where it is not banned.

From the 17th century onward the Portuguese brought in a whole new range of vegetables and fruits, which the Bengalis gleefully adapted to suit their tastes. Instead of the locally available banana flower and squashes and gourds, now the cabbage was shredded into the ghonto, sometimes on its own, sometimes paired with shrimps or fish parts for added scrumptiousness. The indigenous pointed gourd, seasonal to summer, was replaced by cauliflower florets for the dalna in the winter. The Portuguese also introduced cottage cheese (Chhana) to Bengal. Chhana became the basis for a whole range of Bengali desserts, which got added to the already existing rice, lentil and milk-based sweets.  The Portuguese were also the first Europeans to introduce the Western style breads and cakes.

The British brought in the now ubiquitous potato, and the Bengali housewife incorporated it into her fish and vegetable preparations, apart from serving it mashed (seddho), fried (bhaja), and slow cooked in a rich, thick gravy spiced with cumin and asafoetida (alur dom) whole or halved, or boiled in a thick paste of crushed poppy seeds (alu posto). The tomato was also introduced by the British, and was known as Biliti begoon, or the British eggplant. The European colonisers brought in their own modified recipes for various dishes which trickled into the Bengali repertoire (kobiraji cutlet, mangsher stew).

The independence struggle brought about a certain egalitarianism in the Bengali society from the 20th century onwards. An avalanche of social changes and a wave of liberalism stripped away many of the earlier religious and cultural taboos. The post-independence generation no longer cared about segregation at meals - who cooked their food or the faith of their dining companions. The two separate strands of Hindu and Muslim Bengali cuisines increasingly twined together. Because of this confluence, the Muslim Bengali cuisine went mainstream in West Bengal, with a range of kebabs and biriyanis adding to the already existing lavish spread.