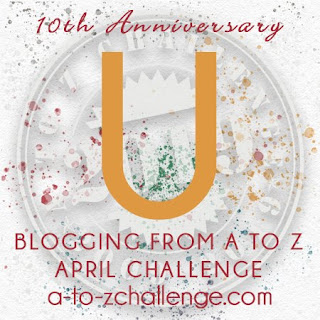 U is for...Uchcharon, one of the very first pop groups of Bangladesh, formed way back in 1973 by Azam Khan (1950-2011). Azam Khan was an awarded and much loved singer, lyricist and record-producer. He was honoured with the Ekushe Podok by the Bangladesh government posthumously. Here are the current band members singing the band's old hits live.

This next track is also from Bangladesh, Valo Achhi Valo Theko, the songwriter was a well known, romantic poet called Rudra Mohammed Shahidullah (1956-1991) from the 80's. I like this cover by Ujaan better than the version arranged by Kabir Suman and sung as a duet by him and Sabina.

Today U is being rocked by tracks from Bangladesh! :) - the next title is Udhao, presented here by two very popular bands - Chirkutt and Joler Gaan, a lovely melodious tune.

Finally, this number c/o Kolkata is by Usha Uthup, a senior singer from Kolkata, born a Tamil and a Bengali by domicile. She has been singing since the 60s and has sung in multiple languages including Arabic and Swahili, apart from a great number of Indian languages.  A very characteristic, easily-recognised voice and an equally trademark stage presence - always dressed in a saree with the typical bindi on her forehead, whatever language she may be singing - Usha is rooted firmly in her own culture.

And if you are in a hurry today, this is where we say goodbye, because the next bit is unconscionably long and totally unsuited for the A-Z. However, if I am taking about Bengal ...can't just ignore the ugly parts...

In recent years, after a spate of horrific rape/murders, there has been a massive amount of concern expressed in the media as well as by ordinary citizens regarding the situation of women in India, and also in West Bengal. Much discussion about the chances of women ever fully participating in society/economy if they can’t move around freely. Heated exchanges between citizens and the Chief Minister, Mamata Banerjee, a woman herself, have been reported in the media.  I have followed these with spiralling disbelief and disquiet.

I have  lived in Kolkata and in Delhi, and  I’ve made work-related solo trips to several  cities across North, South, and Western India. My take, limited necessarily by my own experience, is that Bengalis do have a different, more respectful, less unequal stance towards women. But these are perceptions and maybe outdated to boot, because for many years I have lived away from Bengal, though I’m a frequent visitor.

Through this post, I want to explore how correct my perceptions are. Is Kolkata turning rapidly into another rape capital? And what about Bangladesh, are the women across the border better off?

The statistics on crimes against Indian women, given by the National Crime Records Bureau, show that:

West Bengal as a whole has an alarmingly high rate of crime against women. In 2016, the Bureau ranked it 7th in terms of crime rate after Delhi UT (North), Assam (East), Odisha (East), Telengana (South), Rajasthan (North), Haryana (North). Overall incidence of crime targeting women has increased almost threefold during the last 10 years. This is partly due to  1) categories of crime being added in as new laws are passed – such as acid attacks and stalking, ten years ago these were not reported separately, and 2) more women coming forward to report cases of domestic abuse, sexual harassment and rape.

But for me what is super-disturbing is this - WB used to be at par with the national average ten years ago, with Kolkata being way lower. At present, WB as a whole exceeds the national figures by a pretty shocking margin. Kolkata thankfully is still much lower than the national rates, but there too crimes against women have increased. Bangladesh has a comparatively lower rate of crimes against women, this may be due to reporting bases being different, but certainly there are concerns that they are on the rise.

Spousal violence experienced by women in West Bengal is appallingly high – have a look at this infographic by Hindustan Times. Rape makes up less than 4% of all crimes against women though. West Bengal has a substantially lower rate of sexual crimes as compared to the national average. Occasional, one-off cases of honour killings, which had been wiped off from Bengal more than a century ago, seem to have made a comeback. But even one such murder is too many.

Kolkata  is ranked 17th among the cities, safer than Delhi and Mumbai, and even smaller cities like Pune and Surat.  Clearly, the threat to women is greater in the rural areas of Bengal rather than inside the capital. Trafficking, missing children, and acid attacks are all of great concern in the state. West Bengal has porous borders with Bangladesh, Nepal and Bhutan and has therefore become a transit point for trafficked women/girls. Women from economically weaker sections are especially vulnerable.

The fundamental cause of these forms of aggression against women is the ingrained preference for male children in the subcontinent. But I have always heard that Bengalis were by and large freer of this bias. We have sent women to school in the 19th century, the first Indian women graduates and post-graduates were Bengali (Chandramukhi Bose, Kadambini Ganguly, Sarojini Naidu), some of the first women doctors (Bindubasini Bose), the first South Asian/Indian feminist was a Bengali too (Begum Roqeya). We are comfortable with educated, empowered and liberated women, we do not necessarily think of them as burdens.  Or do we?

The preference for sons has manifested itself in a deadly manner in the shifts in child sex ratio in India. As diagnostic imaging improved and become widely available from 2000 onward, selective abortion of female foetuses became common, skewing the ratio towards boys. There are laws against pre-natal sex determination, but the enforcement is difficult and  therefore loose. However, the sex ratio in W Bengal is within safe limits and foeticide cases are so low as to be negligible (phew!) – unlike the north of the country where it is seriously skewed. While Bangladesh has made remarkable progress on many parameters, still there are 2.7 million missing women due to preferential treatment of sons. (In India the estimates vary from 10-30 million!)

So, baby girls are not being killed in the womb for their sex in both Bengals. But are daughters getting the same treatment as sons? Let’s take a close look -

The female literacy rate in West Bengal is 70.5% based on the latest Census (2011) data, higher than the all-India levels and very similar to female literacy in Bangladesh at 70.1%. Both Bengals have been closing the literacy gap. Overall literacy is marginally higher in West Bengal (76%) than Bangladesh (73%), but bear in mind that the latter started off later and without the educational infrastructure that W. Bengal traditionally had. Bangladesh’s progress re women’s situation has been quite phenomenal, all things considered.

According to the World Bank, only 20% of the female population in West Bengal have any secondary education, this lags behind majority of the states in India. However, enrollment of girls has increased over the last decade, with more girls enrolled in schools than boys in 2015. The award winning Kanyashree Scheme has no doubt given a fillip to education  efforts. Bangladesh (which initiated such schemes in the 80s) has shown much sharper growth in progress – more girls than boys in schools and rising enrollments for females there too. As far as education goes, girls on the other side of the border seem to be doing better. However, early marriage and early childbearing are concerns in both regions, but more glaring in Bangladesh (Read more here and here).

Even so, women’s participation in labour force is inadequate on both sides of the border. Only 33% of the women in Bangladesh work, and the figure stands at an abysmal 26% in West Bengal. (Read here and here.) While there has been some job creation in West Bengal in the last decade, these have been non-farm, temporary manufacturing and construction jobs paying a casual wage - most of them have been taken up by men. Women’s empowerment in West Bengal is nothing to write home about either, as per this report.

Maternal mortality rates have been steadily declining in both Bangladesh (322 to 180 per 100,000) and West Bengal (192 to 113 per 100,000) but that seems to me a prerequisite for any self-respecting society rather than something that comes with bragging rights. The lowest MMR is, just to keep things in perspective, 3-5 per 100,000 live births in countries like Japan and Sweden. Even neighbour Sri Lanka has an MMR in double digits at 30.

So what’s the final score?