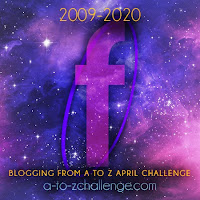 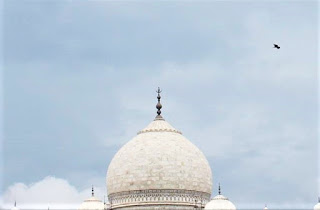 This is part of a photo I clicked on a monsoon day in 2017 - it must be the most famous finial in the whole entire world and probably the most photographed. In fact, the POTUS was the latest well-known figure to be seen there. Let me show you the building that stands under it and you’ll need no further explanations.... 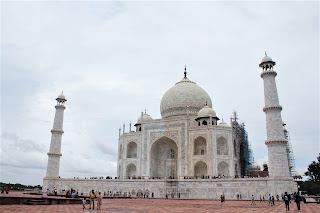 – yup, it’s the Taj Mahal, and the finial I am talking about is the one that’s attached to the central dome of the mausoleum.

How is India 'in' this finial, a small detail stuck onto a building, albeit famous? Actually, there is practically nothing else that exemplifies the melting pot that's India as comprehensively as this finial, and by extension, so does the Taj.


Just a recap of a few things about this monument - it was built by Emperor Shah Jahan, the mausoleum of his queen Mumtaz Mahal, a symbol of his devotion to her. When his time came, he too was laid to rest beside her.  It was started in 1632  and the entire complex took more than twenty years from start to finish. It was one of the most expensive buildings ever built in India and employed over 20,000 artisans brought in from as far away as Turkey and Iran.  It is a UNESCO World Heritage site and is one of the Wonders of the World. Tagore, the Indian Nobel Laureate, wrote that the Taj was 'a teardrop on the cheek of Time.' It receives around 8 million visitors annually, both domestic and foreign. Most foreign visitors make it a point to stop by Taj. It is considered the finest example of Mughal architecture, right there on the pinnacle of all their groovy artistic achievements.


There are many elements in Taj that are influenced by indigenous Indian design, because the Mughals were assimilators par excellence. They took their own Central Asian heritage, cherry-picked local stuff and combined both into a sophisticated, glorious whole. For instance, the mausoleum is topped by 'chhatris' or these smaller domes atop a set of slender columns, a open mini-gazebo like structure - an import from Rajput funerary architecture seamlessly incorporated into the Perso-Islamic tradition. Similarly the shape of the 'onion' dome and more importantly its embellishment with the lotus, a characteristic Hindu motif, is a nod to local  building traditions.


But the finial tops them all and no pun intended, let me tell you why. The crescent moon, an Islamic symbol, has been turned so that the points of the crescent face upward, and combined with the central Mughal tamgha (seal), it resembles a trident, the traditional finial of many Hindu temples to Shiva. Not just that, the knob on which the crescent rests is a stylistic representation of the Hindu mangal kalash (lit auspicious pitcher) that's used for temple finials too. So you have the 99 names of Allah, a whole heap of surahs from the Quran, a finial combining the Hindu trident and the kalash, sitting on a lotus atop the dome. What can better represent the sanjhi virasat or the shared socio-cultural heritage and religious tolerance of India?


There's a lot of wild noise right now about whether the Mughals were 'invaders' or 'outsiders' and not Indian. Some preposterous theory was also floated about Taj Mahal being a Hindu temple rather than an Islamic monument, which thankfully has died a swift and natural death. We are seeing a deliberate, sustained campaign of misinformation - to change Mughal names to Sanskritised Hindu ones. To rewrite history with scant respect for facts - entire personalities and eras have been tweaked to suit a particular political narrative.


Babur was the first Mughal to conquer India and he never stopped pining for his homeland in Ferghana - typical of first generation immigrants. His bones were taken back and interred in Kabul as per his own wishes. But the subsequent Mughal generations knew no other home, they were born in India, lived and 'worked'  in India, built their architectural marvels in India and they are all, except one, buried in Indian soil. I really don't know what other ways there could be of being Indian!


The Mughal legacy is huge, not just in grand, visible monuments, syncretic religious observances  or in the distinctive, sophisticated Mughlai cuisine. But also in unobtrusive, everyday little things - surnames of people, place names,  damask roses, mangoes, muslin, music. In one way or another, every Indian living today has his life impacted, however infinitesimally, by the Mughals.

The last Mughal emperor - Bahadur Shah Zafar, deposed and exiled in 1858 by the British, lamented his fate using the metaphor of the 'beloved' for his homeland - kitna hai badnaseeb Zafar ke dafn ke liye/do gaz zameen bhi na mili ku-e-yaar mein (how wretched your fate is Zafar! that you couldn't get even two yards for a burial in your beloved's land.)


Babur had to flee Ferghana after losing his territories in battle, just like Zafar left Delhi under duress after the First Battle of Independence was lost to the British. Just like Babur, Zafar too wished to be interred in his own homeland. The only difference was that the definition of homeland had changed from Ferghana to India in the intervening three centuries.


Unlike Babur though, Zafar's sons had been either brutally killed or scattered by the colonialists - there was no one to take his casket back to Delhi, nor would the  British government permit it, had there been. Bahadur Shah Zafar's tomb remains in Yangon where he died in exile, a tormented, 87 year old man pining for home. The whole immigrant angst thing had come full circle.


Have you visited the Taj Mahal? Or Ferghana? Did you know that the Mughals were the Jeff Bezos and Bill Gates and Warren Buffet of their times? When you meet people from the subcontinent with names like Majumdar or Talukdar; or watch a performance of Kathak or listen to the sitar in Norwegian Wood; or eat a gulab jamun or a Mughlai paratha - that's a Mughal impacting your life right there!


I'm fond of history, not the grand history of kings and queens alone, but also fascinated by the small histories, the history of the 'ninety nine percent.' And that is why I'm a long term fan of Finding Eliza.  A huge treasure trove of details, family history and photographs to die for!