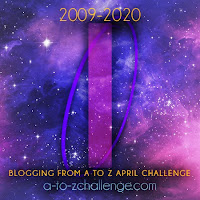 First, here’s The Local Train, a Hindi rock band with their popular track Bandey, a Chandigarh based, relatively young group of musicians. That's followed by Lakkhichhara - a Bengali band based in Kolkata, formed at the turn of the millennium, so a bit older than the first guys. And lastly, there's veteran Lucky Ali with Dekha Hai Aise Bhi a long ago hit when the way we listened to music was oh so very different. 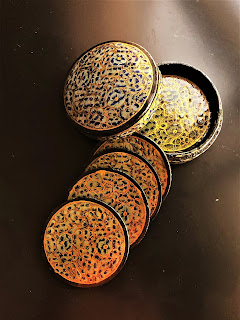 Today's object is this handmade, boxed set of coasters from Kashmir.  This is often called lacquer-work but that is a misnomer, it is actually papier mâché and is typical of the region. Many types of boxes, ornamental animals, candlesticks, cardholders, bangles, tree decorations and other items are made by Kashmiri artisans and sold worldwide. This painstaking, laborious work - creating the framework, making the paper slurry, building up the final object layer by layer, the coating, smoothing and painting, finally the varnishing - it's a labour of love and it's time intensive.

Kashmir is  that Biblical story of wise King Solomon and the two women and infant, remade into a tract of superscenic land. Only there are no wise kings in our times. Beautiful women, beautiful lands, men are mad for them, driven to possess them, only neither women nor land can be owned. Most particularly land can't be owned, it does not pass from one generation of men to the next, we just like to pretend it does. On the contrary, it is the generations that pass through it, the land is timeless, the earth outlasts everyone.


Look at a topographical map, you will see Kashmir is located at the meeting point of mountain ranges, within the twin arms of the Himalayas on one side, the Hindu Kush and the Karakoram on the other. Like a rough triangle with its bottom missing – and Kashmir is enclosed in its apex. So geographically, it is a part of the subcontinent, has been ever since the chunk of land was formed. Geographically, Kashmir is an ‘integral part of India’ as the Indian leaders insist. Whatever one-nation, two-nation, multiple-nation theory you believe in, there is no gainsaying that fact. The people who most vociferously claim otherwise ... well, they themselves too were once an integral part of India. No gainsaying that either. The two most well-known, excavated sites of ancient India - Harappa and Mohenjodaro, are both part of modern day Pakistan.


But then geography doesn’t make a nation, the people, their history and heritage do. Let's take a look at that. The earliest archaeological evidence of human settlement in Kashmir goes back more than 5000 years ago. Plastered mud dwellings, stone tools and pottery have been found, testifying to the deep history of the region. It is known that the King of Kashmir, Abisares aided Porus in the battle against Alexander in 326 BCE. Ashoka the Great made Kashmir part of the Mauryan Empire and with his usual indefatigable energy, turned it Buddhist.


By the fourth century, Kashmir had become a learning hub for both Hindus and Buddhists - the ruins of  Shiva temples, the Martand Sun Temple and Buddhist Stupas remain as proof. Scholars such as Kumarajiva took Buddhism to Tibet and China from Kashmir.  The region produced its own version of Kashmiri Shaivism, the Hindu cult of Shiva which ran alongside the strong Buddhist belief system. While various dynasties rose and fell and annexed Kashmir, it remained under the control of Hindu rulers for the next thousand years.


In the 14th century, a Buddhist refugee from Tibet, Rinchana had established himself as ruler after a period of great upheaval. Rinchana converted to Islam on the advice of his minister, Shah Mir.  The same minister later seized the throne in a coup and established the first Muslim dynasty in Kashmir. Fun fact - it was one of these dynastic kings who got in artisans from Persia and started them on the handicrafts that Kashmir is known for today. Gradually the Muslim population grew and became the majority. The court language changed from Sanskrit to Persian. In the 16th century, one of the Mughal generals annexed Kashmir to the Mughal Empire. Finally Sikh Maharaja Ranjit Singh (of the Koh-i-Noor fame!) annexed Kashmir when the Mughals fell.


The Amritsar Treaty of 1846, signed after Anglo-Sikh Wars, resulted in Kashmir being established as a princely state under the Dogra Hindu Maharaja Gulab Singh, under the suzerainty of the British. And it was Hari Singh, the great grandson of Gulab Singh, who was reigning in Kashmir in 1947, when the grandmother of all conflicts was seeded as the Union of India and Dominion of Pakistan became independent. Read more here.


The whole conflict hinges on a Hindu ruler of a Muslim majority state acceding to Hindu majority India without really finding out what the Kashmiri people themselves wanted.  We are still at the same deadlock, we don't know what the Kashmiris think.

When does heritage stop being a reference point, a happy observance of shared identities and practices and become a burden instead? Should history and heritage determine political futures then? Should we keep being and doing what we were a millennium ago, a century ago? Of course not!  Political systems should reflect the current realities, not be based on what happened a millennium ago, nor even 50 years ago.


The wise King had ruled that the infant be halved and each woman take her portion. The real mother found the very thought unbearable and immediately gave up her claim but the false mother didn't. And so the King knew which woman was what and gave the baby to the real mother.


Because no one is the mother here, no one finds the idea of a divided land and people in a clampdown, intolerable. All of us, Indians, Pakistanis and the Kashmiris need to move on.  The way forward is not through violence, cross-border terrorism or clampdowns. Nothing is likely to be achieved by flexing majoritarian muscles except further alienating the people.  Nothing is achieved by taking the issue to the world fora. No one can solve a problem except the concerned parties themselves. The only option is dialogue between the main stakeholders. It is already 72+ years too late.

Did you know that the King Solomon-women-baby story has a parallel in India? It is part of the large body of literature called Jataka tales, on the many previous births and works of the Buddha.