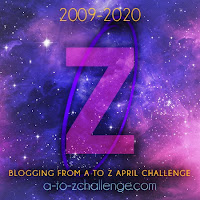 This last day put your headphones on for an old but path breaking band from the 90’s - Bombay Vikings, with their hit number Zara Nazron Se..

And then keep them on for a new one, here’s Zokova live with an untitled track -

The last piece of music in this A-Z series is a jugalbandi featuring maestros Zakir Hussain and Amjad Ali Khan on the tabla and sarod respectively. Both are world famous performers of their instruments. A jugalbandi is a piece played by two musicians in a kind of call and response format.


My final object for this series is this ancient manuscript preserved at the Bodleian Library at the University of Oxford. It is known as the Bakhshali Manuscript after the village (now in Pakistan) where it was found in 1881. It was taken to Oxford in 1902 where it has resided ever since. In it is the earliest recorded ‘zero,’ one of the major contributions of ancient Indians, without which I would not be writing this post on the computer I am using. In fact, the modern world would be totally unrecognisable – no electronics, no automation, no forecasts, no skyscrapers, no moon/mars landing, and last but not least, no pandemic tracking.

Nothing is a super important something

Zero is an invention of the human brain - a profoundly earth-shaking one equivalent to the first art or language development. Why? Because you have to dream it up, imagine it - zero does not occur in nature. There are two aspects to zero, the first one is the 'placeholder' - when it signifies there is something that's empty in a particular position such as 1021. The zero in it signals that the hundreds column is empty. The zero here distinguishes this number from 121. This placeholder notation helps in adding, subtracting and multiplying numbers together without messing things up. What about division? Now division with zero is a mind bender, it leads to all kind of megacomplexities, and as a first step, to the second aspect  - zero as a number in its own right.

A symbol for zero was developed simultaneously and independently in separate cultures - Babylonians and Mayans had symbols denoting nothing, for instance. But these were not true zeroes because the placeholder concept was missing. In Babylon two slanted wedges were used to denote 'nothing' but it wasn't used at the end or between numbers to uniquely distinguish them - 'one' or 'ten' had to be deduced from the context. By the time the Roman Empire happened, that zero also had faded away, Romans did not use zero. The way they wrote numbers was super convoluted. One before five was four. Three after five was eight. But the Roman system lasted for centuries. And the Romans did just fine - they built their monumental buildings and artworks and calculated the dates and seasons with their zeroless numbers.

The Western civilisations struggled with the concept of nothingness. How could 'nothing' be 'something' or come from something? That led to mind-bending philosophical and later religious conundrums and zero got equated to heresy. The Ancient Greek philosophers, Plato and Aristotle (4th century BCE) - had constructed this geocentric model of the universe, the earth being the stationary centre of the cosmos and each celestial body embedded in a 'crystalline' sphere, spinning around the earth in a series of concentric orbits. Like glass bubbles within bubbles, permeated by a substance called 'aether.'

Aristotle had rejected the idea of infinity dismissing it as a construct of the mind, having no tangible evidence in nature, just like zero. (Note that any number divided by zero gives infinity!) Now clearly, the Aristotelian system had to be finite and closed, because there was, according to that system, no infinity - so how could there be an infinite number of spheres? Therefore, the Greek system rejected both the idea of nothingness and infinity.


The most famous student of Aristotle was Alexander the Great, and  the geocentric model spread with his conquests. Then as Christianity swept through the West, this model became closely identified with the Catholic doctrine, so that questioning geocentrism became equated to heresy. For this reason, the work of Copernicus, Kepler and Galileo which contradicted the geocentric model took a long time to find acceptance in Europe. Galileo had to recant and spent his last years under house arrest - that was how his contemporary society treated the Father of Modern Science!

Spin the globe and put your finger on India. Now here was an ancient culture that believed everything was infinite and cyclical, there was no beginning and no end to anything - the universe was created and destroyed on the dreams and dances of gods, life itself was an endless cyclical process of birth, death and rebirth. Ananta - that which has no end and Anadi, that which has no beginning are names for Vishnu, the central God of the Hindu trinity. Those people were clearly comfortable with the idea of infinity. And so also with the idea of nothingness - the emptying of the mind, experiencing nothingness, was a part of the Hindu practice of meditation, which the Buddhist belief system articulated further into Shunyata. So Indians were open to both the ideas of infinity and nothingness long before the first zero was written.


Pingala, an ancient Indian mathematician from the 3rd/4th century BCE used the word 'shunya' for zero. He wrote a treatise on Sanskrit prosody called Chandahsutra which has the earliest description of a binary numeral system and an explicit reference to 'shunya.' In the works of the 4th century astronomer-mathematician Aryabhata, the usage of zero was already implicit. By the time 6th century mathematician Brahmagupta came around, specific rules for the use of the zero had been laid down.


Indians, unlike their Greek counterparts, were obsessed with ginormous numbers, counting into trillions and zillions - the Vedic literature has references to numbers as large as 1062 and also 10421. Even today, Indians use that same system to refer to lakh (hundred thousand), crore (ten million), and arb (billion). These names for such huge numbers, and different kinds of infinity were already in place by around 5th century BCE.

The Bakhshali Manuscript was carbon dated in 2017, and the earliest parts of it were found to date from 224-384 AD. That has pushed back the date of the first written zero in India by around 500 years. Till then the Bakhshali and the first zeroes was assumed to be from the 9th century. Because there is also a 9th century temple within the Gwalior fort which has the number 270 written clearly in an inscription. Till now, the temple inscription was the earliest written zero in the world. But now that's upended, and the temple inscription is the second oldest. Therefore, the zero as a number by itself was imagined in India more than 1600 years ago.


The Indian numbers were taken up by the Arabs and got to the West at the time of the Crusades. Read more about why the Westeners did not accept the zero with the same enthusiasm as the Arabs.


Did you know that bees can be trained to recognise zero? And that scientists are running these experiments with bees to see if that can help them build more efficient computers?