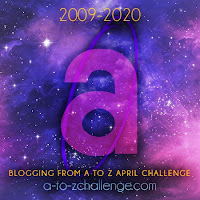 A lot has happened since the sign-up and the Theme Reveal! Hope everyone is keeping safe distance and doing well. As in the other years, starting off my A-Z with some music, here are Agnee and All the Fat Children, two indie bands from India.


And here is a collaboration between A.R. Rahman, possibly the most famous contemporary Indian on the world music scene and U2 - Ahimsa.

Welcome to the A-Z Blog Challenge 2020 going on all April, where I'm posting about India in 26 Objects

This is a small 3" replica in sandalwood of the Ashoka Stambha - Ashoka Pillar, which has been with me for some years now, a gift from my aunt. The original is some 50 m high, built in polished stone, dates from 3rd century BCE and is located in Sarnath. 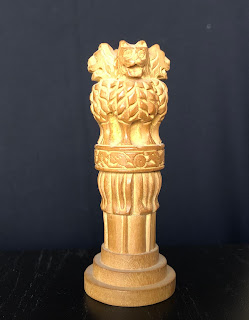 There are some 20 odd pillars of Ashoka surviving, mainly in the Eastern and Central states of India. They constitute some of the oldest stone sculptural and architectural remains from India. Many of them had animal capitals, a design idea borrowed from the Greeks and/or Persians. The representation of the Lion Capital, shown below, has been adopted as the emblem of India in 1950  and appears on currency, official/legal documents and public buildings. The Chakra, or the central wheel under the feet of the lions, is a part of the Indian flag.

And who dis Ashoka? and why da pillars?

Ashoka (lit sans grief, rule 268-232 BCE) was an emperor, the third ruler of the Maurya dynasty founded by Chandragupta Maurya (321-298 BCE). He ruled over a vast tract of land from Afghanistan to modern day Bangladesh, expanding on the handiwork of grandpa. Legend goes that Ashoka started off as a cruel and thoughtless tyrant and ended up being one of the greatest rulers India has ever known, Ashoka the Great is his official moniker. A-class, in other words.

How did this change of heart come about? After a massive battle in his 8th year of rule, Ashoka looked upon the destruction he had caused. In his own words, 100,000 men and animals had been killed, many more died indirectly as a result, 150,000 were taken captive and carried away from their homes.

Probably a bit of an exaggeration for dramatic effect, given that the population of the entire earth was in a handful of millions.

But in any case, it was a bloodbath, so a great remorse took hold of him. Ashoka vowed that he would give up violence and make the propagation of faith and promoting peace and harmony among his subjects his main cause from then on.

Accordingly, he constructed Buddhist monasteries all through his empire, put out his views and prescriptions for peace carved on these handy stone tablets - called edicts, and these stone pillars all round the countryside. Ashoka called them Dhamma Stambh, or Righteous Pillars. Many of the inscriptions make it clear that Ashoka favoured nonviolence, religious tolerance and individual freedoms. The spread of Buddhism soared under Ashoka's patronage, and the faith was taken as far as Thailand to the east and Afghanistan to the west.

In short, Ashoka was the first worldwide political champion of Ahimsa. And that is a great A-word, even if I say so myself! I can think of several contemporary political personalities who would do well to (re)read Ashoka's advice and apply it, updated to their own situations.

What do you think of nonviolence as a political tool? Any parallels where an emperor's patronage has popularised a religion?