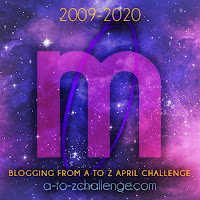 Have a listen first to Alisha Chinai's Made in India - a megapopular track from 1995, and then go onto a more recent one from MAP. Enjoy!


And finally, Maatir Rong from Anupam Roy, for its evocative visual and lyrics in this difficult locked down time in Kolkata, where my elderly parents are. 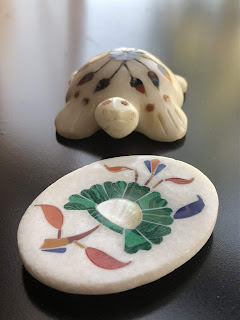 I have two objects today, both have been created by the same masterful artisanal skills and materials – a fridge magnet and a tiny tortoise made of Makrana marble inlaid with mother-of-pearl and other semi-precious stones.  The technique is called parchinkari in Urdu/Hindi, known as pietra dura in the west. Used extensively in the Taj Mahal and to a lesser extent in the Red Fort, Shah Jahan had special workmen brought in from the Middle East for the inlay work on his beloved queen's mausoleum. At least one of the master calligraphers has signed himself Amanat Khan Shirazi, signifying his origins lay in Shiraz in Persia.


The Taj was a massive, multinational project - men and material from all over India and even beyond were brought to Agra. The Taj is clad in flawless white marble sourced from Makrana, Rajasthan, jasper from Punjab, lapis lazuli from Afghanistan, jade and crystal from China, turquoise from Tibet. Sapphires were brought in from Sri Lanka, carnelian from Arabia. In all, there are more than two dozen different semi-precious and precious stones that were used for the inlay. Men came from all over too - the emperor brought in calligraphers, stonemasons, craftsmen and designers from Persia, Turkey, and the Deccan to complete this monumental project. There is a popular story that Shah Jahan cut off the hands of the workmen and gouged out the eyes of the designers so that nothing like the Taj Mahal could ever again be either conceived of, or executed.

That magnet I picked some years ago up on my way back from the Taj Mahal, out through the main gate walking towards the car park - there is a group of shops lining the broad promenade. The inlay works range from these tiny magnets and key chains to large dining tables, all exquisitely crafted. These formidable skills have been handed down generationally from the craftsmen who worked on the Taj, one of the artisans told me. They were the direct descendants of those workmen, pardada ke pardada ke pardada, he had said smiling - great grandfather's great grandfather's great grandfather, so 10-11 generations which broadly fits in with the timeline.


But that is most probably just a romantic story, a way to claim a direct connect to the magic and the miracle of the Taj - to have a forefather work on the most famous mausoleum of all time. But what is indisputable is this - if those skills have survived in Agra beyond the 17th century, clearly the Taj craftsmen were alive to teach them to their apprentices. Therefore, those creating the original inlays must have retained their abilities, they did not have their hands amputated. It's a myth. QED.


Besides which, it makes zero sense for Shah Jahan to massacre his work force considering the trouble he had taken to recruit it. And that he had plans to have the same stone inlay work done in his Red Fort in Delhi, built a little later than the mausoleum. Consider also that the Mughals had grandiose notions of justice residing in the Emperor himself. Their subject peoples had direct access to them through the weekly imperial audience and the Emperor was the supreme judicial authority. Jahangir, Shah Jahan's father, had installed  a 'chain of justice' attached to a bell which any subject could ring at any hour, night or day, to  demand the Emperor's attention and swift justice.


The titles they used are revealing too: Jahan Panah or Refuge of the Universe, Zillullah - Shadow of God (on earth), the protector of the realm in other words. This widespread hacking off of hands, if carried out, would have been a total PR disaster. No workmen would feel motivated to work for the Emperor. And predictably no contemporary records exist of this mass scale amputations either. Considering that 22,000 workers built the Taj that would require the chopping of an awful lot of hands!


The Mughal system of justice, law and order, in spite of being plagued by corruption and nepotism, was in principle quite solid. It was, very simply put, a three tier system, the village council, the formal provincial court presided over by a provincial judge - the Qazi; and the uppermost tier was the imperial court under the Emperor himself. By modern standards the administration of justice was arbitrary, but swift. Capital punishment and mutilations were go-to penalties for several crimes, however, these required imperial approval and were reserved for cases where a particular point or example was to be made. Contemporary accounts by foreigners recorded that by and large the Mughal Empire was effectively policed and fairly administered. So that's another nail in the coffin of the idea that Shah Jahan would go hacking off limbs of his workmen.

Have you heard of this idea - to incapacitate the designers/artists so that the artwork of an empire or personality remained unsurpassed forever? Do you know of a ruler who has ever done it?